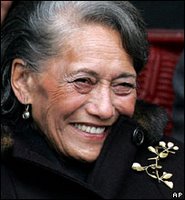 The queen, whose full name was Te Arikinui Dame Te Atairangikaahu, was the seventh Maori sovereign, a descendant of a royal line that began in 1858, when the Maori responded to Birtain's colonization by choosing a monarch of their own.

She was the longest-serving head of the Kingitanga movement, which began as an effort to stop tribal land losses as European settlers flocked to New Zealand.

Although the position is largely ceremonial, Dame Te Ata enjoyed great respect among the Maori and other New Zealanders and was recognized abroad as a cultural ambassador for her people.

Maoris, who to be paid less than New Zealanders of European extraction, began leaving their ancestral homeland in substantial numbers during Dame Te Ata's rein. One recent study found that if present trends continue, within a few decades more than one third of all Maoris will live in Australia.

Dame Te Ata became queen in May 1966 on the day her father, King Koroki Te Rata Mahuta Tawhiao, was buried.

No successor was immediately announced. Although the title is not hereditary, the next monarch is to be chosen from among her kin in the Kingitanga movement. Maori make up about 540,000 of the country’s four million people.

Dame Te Ata will be buried in an elaborate ceremony on Taupiri Mountain, near the settlement at Ngaruawahia.
Posted by Shaun Mullen at 5:11 AM
Email ThisBlogThis!Share to TwitterShare to FacebookShare to Pinterest