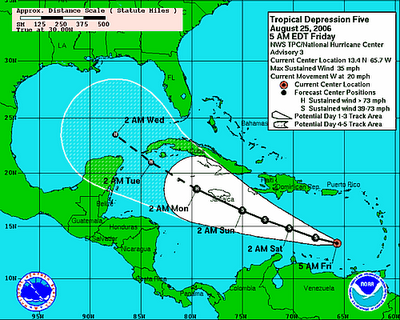 But as the first anniversary of Hurricane Katrina approaches, a storm that will be named Ernesto if it gains enough strength is taking a nearly identical track through the Caribbean as did the ferocious Catagory 4 storm that struck the Gulf Coast and New Orleans last August 29.

Meanwhile, Slate has a terrific package of Katrina stories and photographs. Click here and be amazed.
Posted by Shaun Mullen at 3:26 AM
Email ThisBlogThis!Share to TwitterShare to FacebookShare to Pinterest