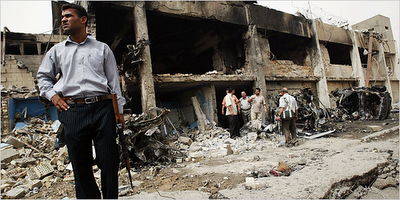 Stop Presses: Newspaper blast further evidence of decrease in violence
Three weeks after U.S. and Iraqi forces began a second major security sweep, Baghdad neighborhoods seems quieter, if not safer. But can it last? And has the sacrifice of "quality of life" literally and figuratively been too great?

The U.S. command asserts that murders are down 36 percent, but there are contradictory accounts in the mainstream media of the extent to which the sweep may be succeeding, so Kiko's House went to the source and contacted several Baghdad bloggers for their up close and personal assessment.

The situation is better but not mainly because of the major sweep. Simply because people are no longer going out in the streets as they used to. My parents, for example, are locked in the house. They are afraid to go even to the market, and if they do, they go and come back quickly before someone blows up himself among them in the market.

Add to this the unlimited number of Iraqis who left and are still leaving Iraq. But still, the sweep is one of the factors that helped in this "quiet before the storm" thing. The question is: will Baghdad stay calm after the end of the campaign?

According to Nabil, who blogs at Nabil's Blog:

In my neighbor neighborhood, its like there is no life. All shops are closed. You go out in the street, you don't find cars nor even people, so I just don't know what to say about it.

I am so sad about what is happening in my country.

Zeyad at Healing Iraq says that:

You are partly right about waning violence . . . But really, it's only a decrease in attacks against American troops. The violence is taking a new shape these last few weeks: Iraqi-on-raqi violence.

Omar at Iraq the Model notes that the security sweep is in western and northern Baghdad at this time and he lives in the eastern party of the city, but adds:

Violence levels seem to be a little bit lower these days, but I suggest we wait until the operation covers the rest of the city.

Since Aug. 7, about 12,000 additional U.S. and Iraqi troops have been sent into the capital as part of the security effort, dubbed "Operation Together Forward," and have covered four of the most problematic capital neighborhoods.

Meanwhile, at least 15 people were killed and 63 others wounded when a suicide car bomber detonated at an Iraqi police checkpoint near the Interior Ministry on Monday morning. The blast came a day after at least 50 people were killed in various acts of violence across the country, including two people after a suicide car bomber attacked Iraq’s largest newspaper inside its fortified compound in downtown.

Despite Sunday's high death toll, Iraqi Prime Minister Nuri al-Maliki said he did not foresee a civil war and that violence was abating. He insisted that his government was making progress in combatting attacks by insurgents and sectarian clashes between Shiites and Sunnis:

SO MUCH FOR A SMOOTH TRANSITION - I
Members of a Shiite militia known as the Mahdi Army killed at least 15 Iraqi soldiers as possibly as many as 25 in fierce fighting on Monday in the southern city of Diwaniyah.

The fighting began overnight after soldiers arrested a man linked to the militia, which is loyal to the fiery Shiite cleric Moqtada al-Sadr. It raged for 12 hours until the soldiers ran out of ammunition, some of whom were then executed in a public square. Thirty-five people were wounded.

SO MUCH FOR A SMOOTH TRANSITION - II
In a possible look at things to come as U.S.-led coalition forces hand over security to the Iraqi government, civilians looted a military base vacated by British troops and stripped it of virtually everything removable.

The looters, some with their faces covered, ripped corrugated metal from roofs, carried off metal pipes and back trucks into building entrances to load them with wooden planks.

Camp Abu Naji, was first invaded by a handful of Iraqis hours after 1,200 British troops pulled out to redeploy along the border with Iran to crack down on weapons smuggling.

Iraqi police dispersed looters by firing shots into the air, but scores of looters returned the next day when the camp was under the supervision of a small contingent of Iraqi troops.

Amarah, which is about 200 miles southeast of Baghdad, is in a area of Iraq once considered to be relatively stable, but British troops had been coming under attack almost daily in recent weeks.

YET ANOTHER LOSS
Another small piece of Iraq has died with the resignation and departure of the director of the Baghdad Museum, who said he had felt under threat from fundamentalists with ties to the Shiite-led government.

Donny George, a prominent advocate for the preservation of antiquities in Iraq who was revered for his skills, was a midlevel official in the Baath Party under Saddam Hussein's government.

Since the fall of Saddam, hard-line Shiite politicians have pushed for a purging of Baath Party officials from the government, even though many Iraqis joined the party out of social pressure or to advance their careers and not out of ideological motivation.

(Photography by Wathiq Khuzaie/Getty Images)
Posted by Shaun Mullen at 12:10 AM
Email ThisBlogThis!Share to TwitterShare to FacebookShare to Pinterest