Gunther Grass: Out of the Closet 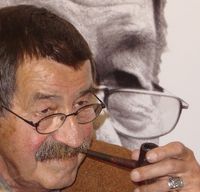 Like many a literate schmoo, I read a fair amount of Gunther Grass back in the day. This included the mandatory big three -- "The Tin Drum," "Cat and Mouse" and "Dog Years."

The Nobel Prize winner, who has campaigned tirelessly for Germans to confront their past, revealed last week that he was a willing participant in the Nazi war machine, not a youth conscript as he had maintained, and served in the Waffen-SS in the waning days of World War II.

Time magazine's Nathan Thornburg picks up the story from here:

Newspapers across Germany were predictably atremble over Grass's revelation. The Welt am Sonntag called Grass' admission "moral suicide," and compared his insistence that he never fired a shot while in the SS to Bill Clinton's saying he smoked weed but didn't inhale. Other papers cried "too late" and wrote at length about the glass house Grass had been living in. Over in Poland, Lech Walesa said Grass should give back his honorary Polish citizenship. At least one conservative politician in Germany, perhaps looking for payback after decades of being nettled by Grass, has called for his Nobel Prize to be rescinded.

What's being lost in all the giddy gotcha is an acknowledgement of the continued importance of Grass' message of reckoning with the past. Young Germans don't want to talk about the past. At the World Cup, they were delighted to be able wave their flags like Americans at a Fourth of July demolition derby. German Chancellor Angela Merkel has remained silent on a controversial proposal to build a Berlin memorial to the German families who were refugees from occupied territories after the war. Even Germany's most famously repentant flakhelfer, Pope Benedict XVI, nee Joseph Ratzinger (who was assigned to a missile battery protecting a BMW factory near his hometown during the war), has strayed from the cautious path of reckoning and reconciliation. His recent speech at Auschwitz, which seemed in part to recast the Holocaust as a cleverly disguised attempt on the life of the Christian faith, left many people scratching their heads.

Thornburgh nails it. While I was disappointed to read of Grass's relevation, it does not diminish his power as a storyteller and his message remains just as potent. Unhappily, it doesn't seem like a lot of younger Germans want to hear it.
Posted by Shaun Mullen at 3:05 AM
Email ThisBlogThis!Share to TwitterShare to FacebookShare to Pinterest