Iraq I: Okay, There's a Civil War, So What's Next? 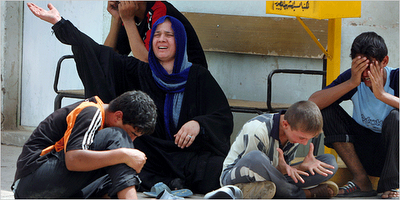 20 religious pilgrims were killed, 300 wounded on Sunday
although U.S. and Iraqi forces had been planning security for months.
There is nothing remotely laughable about what's going on in Iraq with one exception -- the silly side debate over whether a country where over 3,500 civilians are being killed a month while the government flails, the White House remains in denial and U.S. and Iraqi troops race from conflagration to conflagration is in civil war.

Of course Iraq is in civil war.

When it began is worthy of debate My view is that the point of no return was the destruction of the Golden Mosque in Samarra in February by Sunni insurgents.

We tend to think of Iraq in here-and-now terms, but the lessons of other civil wars are applicable. Daniel L. Byman and Kenneth Pollack use that historic record in a Washington Post analysis in arguing why Iraq is in civil war and, more importantly, what the consequences could be regionally and globally if it is not halted:

For all the recent attention on the Israeli-Hezbollah conflict, far more people died in Iraq over the past month than in Israel and Lebanon, and tens of thousands have been killed from the fighting and criminal activity since the U.S. occupation began. Additional signs of civil war abound. Refugees and displaced people number in the hundreds of thousands. Militias continue to proliferate. The sense of being an "Iraqi" is evaporating.

Considering how many mistakes the United States has made in Iraq, how much time has been squandered, and how difficult the task is, even a serious course correction in Washington and Baghdad may only postpone the inevitable.

Refugees are spreading the fighting.
Afghanistan produced the largest refugee flow since World War II, with more than a third of the population fleeing. Conflicts in the Balkans in the 1990s also generated millions of refugees: In Kosovo, more than two-thirds of Kosovar Albanians fled the country. In Bosnia, 1 million. Comparable figures for Iraq would mean more than 13 million displaced Iraqis, and more than 6 million of them fleeing to neighboring countries.

Terrorists find new homes.
The war in Iraq also has been a disaster insofar as the struggle against Osama bin Laden. Fighters in Iraq are receiving training, building networks and becoming further radicalized -- and the U.S. occupation is proving a dream recruiting tool for young Muslims worldwide.

Radicalism is contagious.
Civil wars tend to inflame the passions of neighboring populations. This is often just a matter of proximity: Chaos and slaughter five miles down the road has a much greater emotional impact than a massacre 5,000 miles away. The problem worsens whenever ethnic or religious groupings also spill across borders.

Secession breeds secessionism.
Iraq's neighbors are just as fractured as Iraq itself. Should Iraq fragment, voices for secession elsewhere will gain strength. The dynamic is clear: One oppressed group with a sense of national identity stakes a claim to independence and goes to war to achieve it.

Beware of neighborly interventions.
Neighboring states tend to get involved, turning the conflicts into regional wars. Foreign governments may intervene overtly or covertly to "stabilize" the country in turmoil and stop the refugees pouring across their borders. Neighboring states will intervene to eliminate terrorist groups setting up shop in the midst of the civil war, as Israel has done repeatedly in Lebanon.

Byman and Pollack argue that these things must happen to prevent the war from spreading:

The U.S. along with its Asian and European allies, will have to make a major effort to persuade Iraq's neighbors not to intervene in its civil war. Economic aid should be part of such an effort, but will not be enough. For Jordan and Saudi Arabia, it may require an effort to reinvigorate Israeli-Palestinian peace negotiations.

It is tempting to consider ways to play one Iraqi faction against another in an effort to manage the civil war from within. The experiences of other powers, however, suggest how difficult this is. The Soviet Union tried to prop up President Najibullah when it left Afghanistan, and Israel used various Maronite militias as its proxies in Lebanon, but they all proved ineffective. The U.S. tried to use a proxy force and intervene directly in Somalia, with equally disastrous results.

Should chaos engulf Iraq, the Kurds will understandably want out, but this risks inspiring secessionists elsewhere in Iraq and throughout the region. In return for the Kurds agreeing to postpone formal secession, the U.S. should offer them extensive economic aid, assistance with refugees and security assurances, perhaps backed by U.S. troops, as well as promising support for independence when Iraq is more stable.

One of Washington's biggest challenges will be to prevent the flow of dangerous people across Iraq's borders in either direction -- refugees, militias, foreign invaders and terrorists. One option might be to create a system of buffer zones and refugee collection points inside Iraq staffed by U.S. and other coalition personnel.

Bynam and Pollack conclude by noting that no country in recent history has successfully managed the spillovers from a full-blown civil war and most attempts have failed miserably.

Ending an all-out civil war typically requires overwhelming military power to nail down a political settlement. It took 30,000 British troops to bring the Irish civil war to an end, 45,000 Syrian troops to conclude the Lebanese civil war, 50,000 NATO troops to stop the Bosnian civil war, and 60,000 to do the job in Kosovo. Considering Iraq's much larger population, it probably would require 450,000 troops to quash an all-out civil war there. Such an effort would require a commitment of enormous military and economic resources, far in excess of what the United States has already put forth. (Italics mine.)

How Iraq got to this point is now an issue for historians (and perhaps for voters in 2008); what matters today is how to move forward and prepare for the tremendous risks an Iraqi civil war poses for this critical region. The outbreak of a large-scale civil conflict would not relieve us of our responsibilities in Iraq; in fact, it could multiply them. Unfortunately, in the Middle East, one should never assume that the situation can't get worse. It always can -- and usually does.

How can the administration admit that Iraq is in civil war without taking blame? And so far this administration has done everything it can to run from accontability. When even they can no longer hide behind rhetoric, who will they find to blame the civil war on?