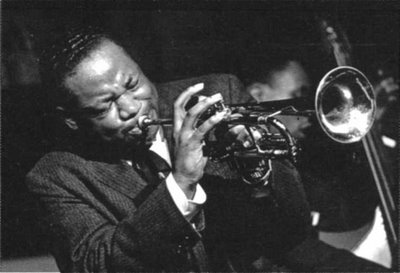 Clifford Brown and I had some things in common. We grew up in the same town, went to the same college and adored jazz. What we did not have in common is the fact I can't play a lick, while Brown was one of the most influential jazz trumpeters of all time although his recording career lasted only four years.

Brown, who died in 1956 at the tender age of age 25 in a car crash, influenced Donald Byrd, Lee Morgan, Freddie Hubbard, Wynton Marsalis and Arturo Sandoval, among others.

So with that in mind, we're going to highlight my favorite Brown album and albums by others playing his music. I'm pretty sure that all of the albums are still in print -- a testament to their excellence. Some are available on the cheap, albeit in used condition, from the usual online retail suspects.

A STUDY IN BROWN (Clifford Brown & Max Roach)
The nine tracks on this Polygram album were cut about a year before Brownie's death and are an excellent example of how he could take oft-played standards and improvise the hell out of them. Pianist Richie Powell and tenor saxophonist Harold Land round out the quartet.


THE BEST OF DONALD BYRD
I'm not a big "best of" album guy and Byrd can be a little too slick sometimes, but this 1992 Blue Note compilation is terrific and might as well be a Clifford Brown tribute album.


HOT HOUSE FLOWERS (Wynton Marsalis)
This 1984 Sony album was my intro to Wynton and the musical Marsalis family. Some of the lush arrangements are a bit over the top, but no matter, his cover of "Stardust" is worth the price of admission.

THE SIDEWINDER (Lee Morgan)
You can hear Brownie's influence in this explosive Blue Note album, recorded in 1963 as the trumpeter was emerging as a star in his ownright. The title track has become a classic.

SKYDIVE (Freddie Hubbard)
I was going through a purist phase when this CTI album was released in 1972 and thought it too "commercial," but I have come back to it over and over through the years. The young keyboardist is sure to catch your attention. Some guy by the name of Keith Jarrett.