Not So Nice Map du Jour 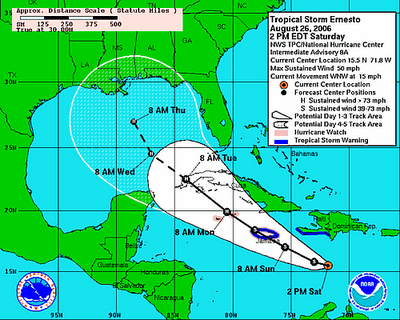 Projected 5-day track of Tropical Storm Ernesto as of 2pm EST Saturday
As the first anniversary of Hurricane Katrina approaches, Tropical Storm Ernesto has entered the Caribbean and is expected to strengthen as it takes a nearly identical track as did the ferocious Catagory 4 storm that struck the Gulf Coast and New Orleans last August 29.

The National Hurricane Center in Miami says that Ernesto will become a Category 1 hurricane, with 74 mile per hour (119 km per hour) winds by Monday, a day before the anniversary of Katrina, the costliest U.S. natural disaster ever, which devastated New Orleans and killed about 1,500 people.

Ernesto would be the first hurricane of the 2006 season, which runs runs from June 1 through Nov. 30. Last year's season was the most active on record, with 15 hurricanes including Katrina.
Posted by Shaun Mullen at 10:33 AM
Email ThisBlogThis!Share to TwitterShare to FacebookShare to Pinterest