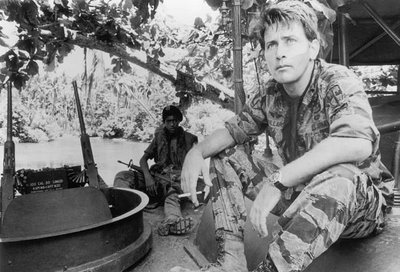 Nick was never the same after Vietnam. He would lapse into deep depressions. He let his teeth go, chain smoked cigarettes and pot and drank way too much booze, fought with his wife and would leave home for days at a time after suffering nightmares about the people that he had killed and seen killed.

I was one of the few people who knew about Nick's Vietnam experience. It was horrific -- skippering a Navy river boat that patrolled the Mekong River.

You know what I'm talking about if you've seen "Apocalypse Now." Nick lived it.

It helped that Nick was married to a drug counselor who worked with psychiatrists, and he was diagnosed fairly early on with post traumatic stress disorder (PTSD) from his Vietnam experience. Even with the military's tough standards, he was an obvious candidate for 100 percent disability and got it with little hassle.

Nick couldn't hold a job, although he did remarry and was house husband to two children. But the demons that he brought home from the war were never far away and he battled them until his lungs packed in from cigarettes at age 60.

* * * * * *
According to a landmark 1988 study, Nick was among the 30.9 percent of Viet vets who suffered from PTSD at some point after returning home and among the 15.2 percent who displayed symptoms at the time they were examined 20 or so years later for the study.

While I welcomed the study as a long overdue acknowledgement that there were an awful lot of Nicks out there who needed help and the timing coincided with and brought welcome publicity to a project on Philadelphia area vets that I supervised, I was always uncomfortable with the numbers.

Why? Because I knew for a fact that only about 15 percent of all GIs in Vietnam ever saw combat, and even allowing for the occasional whacked out mess cook or file clerk, 30.9 percent and 15.2 percent seemed way too high.

With all due deferrence to Nick, I have been proven right, but I'm not happy about it.

A reexamination of the 1988 study summarized in Science magazine concludes that the original numbers were indeed way too high. The new study concludes that 18.9 percent of Viet veterans suffered from PTSD at some point and 9.1 percent at the time they were examined.

Researchers dissected the original study and did a comprehensive check of the military records of the vets who were examined. While acknowleding that non-combat servicemen sometimes had bad experiences, including medics who cared for the wounded in facilities far from combat, the researchers found that many of the vets had PTSD-like symptoms before they went to Vietnam, frequently nightmares.

So why am I not happy?

Because as good as it is to set the record straight and know there are only about as half as many Nicks, the timing sucks. And after all, we're still talking about a quarter million vets.

The Bush administration (and Clinton administration before it) has been quietly cutting back on veterans' health-care benefits, the Veterans Administration hospital network is overburdened and underfunded and mental health services in general in the U.S. are inadequate, let alone for vets who have special needs.

The major consequence of the study is that it will be used by politicians and bean counters as a rationale to further cut back on veterans' services at a time when new waves of vets in need are returning home from today's wars.

Bobby Muller, president of Vietnam Veterans of America, who was paralyzed from the chest down in Vietnam, puts exactly the right spin on things:

The fact is, that veterans suffering mental health problems have been under assault, the diagnosis has been continuously attacked in terms of its legitimacy, funding has not been ramped up to handle these problems for vets returning from Iraq, and now people will see this study and say, "Oh look, the problem is not as bad as we thought it was."

This is absolutely the last thing we need.

I worry for the men and women there now, and I worry they won't get much more support back home than they have there. I feel for all the Nicks past and present. We must do all we can to make sure they get all the help we can offer them to get back into "regular" life and help with traumas past and present.

I could not have said it better, LaPopessa.

Nick had the love and support of his wife and kids and a few folks like myself and he still was barely able to get through the day.

I fear for returning Iraqi vets because, in part, our lives are so much more complicated and busy today and I'm afraid some of these men (and women, let's not forget) will not get the love and support that they need.