Don't Cry For Me Pluto 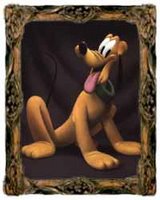 After years of bitter debate, astronomers have reclassified Pluto as a "dwarf planet" and elevated two other small celestial bodies to that new classification.

Joining Pluto in the dwarf array are Ceres, the largest asteroid, and an object known a UB 313, which is nicknamed Xena, is larger than Pluto and, like it, orbits out beyond Neptune in a zone of icy debris known as the Kuiper Belt.

Well, I'm all for integrity, but what about those solar system mobiles hanging in classrooms all over the world? Didn't the astronomers consider what the consequences of taking a scissors to Pluto will be?

Posted by Shaun Mullen at 4:37 PM
Email ThisBlogThis!Share to TwitterShare to FacebookShare to Pinterest