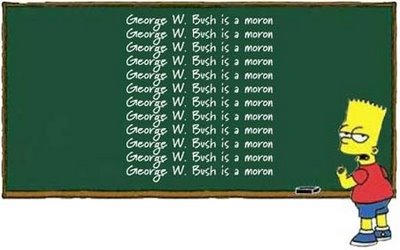 Yet another poll confirms that Americans are more interested in contemporary culture than in classical literature or current events. In other words, we're a bunch of dumb bunnies.

The poll found that:

77 per cent of Americans can name at least two of the dwarfs from the fairy tale Snow White, but only about 24 per cent can name two U.S. Supreme Court justices.

73 per cent can name the Three Stooges (Larry, Curly and Moe), but only 42 per cent could name the three branches of the U.S. government (judicial, executive and legislative).

60 per cent of respondents knew Homer Simpson's son is named Bart, but only 21 per cent could name one of the ancient Greek poet Homer's epics (The Iliad and The Odyssey).

For more on the poll, click here.
Posted by Shaun Mullen at 5:11 AM
Email ThisBlogThis!Share to TwitterShare to FacebookShare to Pinterest

Link to the survey?

Speaking of "dumb bunnies," I thought you'd want to take a look at this from Paul Craig Roberts at creators.com dated yesterday.

(My "workaround" seems to be working for now...I hope it continues.)