Ernesto: Hoping To Not Get To Know You 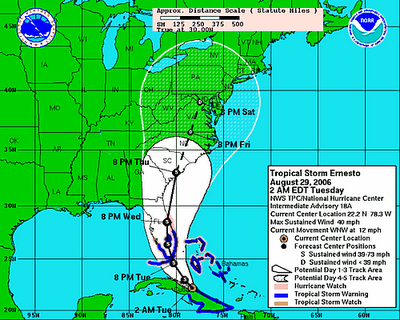 Still, Ernesto could gain strength in the warm waters off Cuba and make landfall as a hurricane in South Florida as early as Tuesday night.

That would be exactly one year after Katrina pummeled the Gulf Coast. The memories of that deadly storm and the seven hurricanes that have hit Florida since 2004 are fresh in the minds of many Floridians.

Katrina, the costliest U.S. natural disaster ever, devastated New Orleans and killed about 1,500 people. Ernesto would be the first hurricane of the 2006 season, which runs runs from June 1 through Nov. 30. Last year's season was the most active on record, with 15 hurricanes including Katrina.
Posted by Shaun Mullen at 3:48 AM
Email ThisBlogThis!Share to TwitterShare to FacebookShare to Pinterest