And Now a Word From Your Sponsor 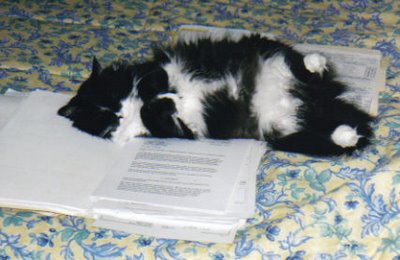 Kiko (your sponsor) mind melds with computer tech manuals
We are happy to report that download times for Kiko's House have improved dramatically since Kiko took some time off from mousing and did some tweaking. Kimba, hopeless as usual, looked on in befuddlement while she tinkered, but then what do you expect from a kitty who has caught exactly one shrew in three years of hunting? (And that one probably died of shock.)

But there is a recent wrinkle involving the Mozilla Firefox web browser that's on you, specifically not being able to get new content when you reload a page.

Kiko says that this can be bypassed by hitting ctrl-F5 (which is the "secret" reload key). She warns that it sometimes takes a few tries.

While this problem is frustrating, my enthusiasm for Firebox is undiminished, and Kiko's House regulars report much faster download times than when they use a jalopy of a browser known as Internet Explorer.

As I'm fond of saying, Firefox makes IE seem like your maiden aunt, who gets the flu every winter and is prone to bouts of rheumatism. Firefox, on the other hand, is better inoculated against viruses, worms, hair balls and other cyber vermin, and is absolutely free.

In yet another instance of IE being a pain in the keester, Microsoft planted a bug in the IE browsers where I work in the course of an automatic update earlier this month that causes it to hiccup when certain web pages are loaded. The pages disappear and the user's default page appears.

Microsoft has issued a mea culpa of a sort, but nobody seems to know how to fix the problem.

Anyhow, give Firefox a try. You'll like it.
Posted by Shaun Mullen at 2:12 AM
Email ThisBlogThis!Share to TwitterShare to FacebookShare to Pinterest