9/11 Anniversary: Denial Is Not a River in Egypt 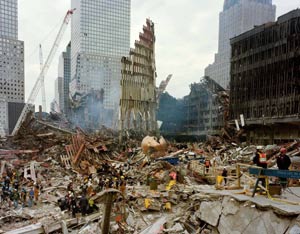 As New York City approaches the five-year anniversary of 9/11, thousands of rescue and recovery workers are suffering from serious health problems that government agencies refuse to recognize as related to the terror attacks.

A draft report from Mount Sinai Hospital's World Trade Center Medical Monitoring Program suggests that rescue and recovery workers are sicker than the general population, which tracked the medical condition of 9,283 people who worked at the Twin Towers site or in the cleanup effort. Most of them are men who were working in law enforcement or construction.

(Take a moment to scroll down to the "Modern day Pietá" photograph posted here yesterday. Notice the dust covering the rescue workers? Okay, now read on . . .)

According to the report:

The health effects of rescue recovery and volunteer work at the WTC site were highly prevalent, severe and persistent in the nearly 10,000 workers we saw clinically between 2002 and 2004.

The evidence showed sharp increases in respiratory symptoms, including abnormal lung capacity in one-third of the workers one to two years after exposure, and lung problems affecting five times more people than you'd expect in the general population.

The doctors who run the program cautioned that the report was only a draft and that some of the numbers may change after a peer-review process.

Rep. Jerrold Nadler, the New York Democrat, has fought to get government agencies to recognize the relation between the rescue and clean-up efforts and the health problems:

This (study) is very important not because it doesn't tell us anything that we didn't know, but because it makes it much harder to deny. All kinds of government officials, are still denying that all these injuries, (this) inability to work, are work-related.

The Mount Sinai doctors warned the consequences are likely to get worse, possibly including cancers that were not expected to show up for at least 10 years, but hundreds of people claim they've already developed World Trade Center-related cancer.

SHOULD KIDS BE PROTECTED FROM 9/11?
Yes and no. No pre-schooler should be allowed to see gruesome images of jetliners crashing into skyscrapers or people falling from them, but the impulse to shelter children from the realities of the word and not help them learn to cope is misplaced.

That is the view of many child-care experts. Me, too.

ANOTHER GREEDY RAT BASTARD LAWYER
The September 11th Victim Compensation Fund for the families of people killed in the terror attacks was one of the very few positive things to come out of the tragedy.

Laura Balemian, whose husband Edward J. Mardovich died in the , received one of the largest awards paid out by the fund: $6.7 million. But she in turn has paid out what is almost certainly the highest legal fee.

While the vast majority of victims were represented before the fund pro bono or for a nominal fee, Balemian paid her lawyer, Thomas J. Troiano, a one-third contingent fee, or over $2 million.

The propriety of Troiano's fee is now before the courts and damned well deserves to be.

A guardian appointed by the Suffolk County Surrogate's Court in , where Mardovich's estate is in probate, last year challenged the fee as excessive and not in the best interests of Balemian's four children. Troiano responded earlier this year by suing Balemian in federal court for declaratory judgment approving his fees.

The situation is an uncomfortable one for trial lawyers' groups, who normally support contingent fee arrangements but went to extraordinary lengths to avoid being seen as profiting from the terrorist attacks.

Kenneth R. Feinberg, the special master who oversaw the fund's distribution of some $7 billion, submitted an affidavit in the case in which he called Troiano's fee "shocking and unconscionable" in light of the fund's purpose and its guidelines recommending attorney fees be kept under 5 percent.


In my experience of presiding over the processing and award determinations of some 7,400 claims, of conducting hundreds of individual hearings within the Program, and of meeting with thousands of families and victims in large and small groups, I have never learned of a legal fee even approaching the fee sought in this case.

But Troiano said in court documents responding to Feinberg's affidavit that Balemian's large award, which was increased from an initial presumptive award of $1.1 million, justified the contingent fee.

If anything is 'shocking and unconscionable' it is that, due to unabashed greed, Defendant now (more than two years after having ratified the Retainer Agreement) seeks disgorgement of fees earned by Plaintiff from the hard work, at significant personal sacrifice, he rendered for the benefit of Defendant and her children.

(Photo by Joel Meyerowitz)
Posted by Shaun Mullen at 1:20 AM
Email ThisBlogThis!Share to TwitterShare to FacebookShare to Pinterest