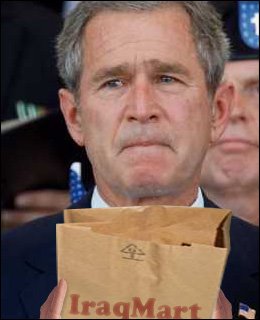 Americans bought lock, stock and barrel into President Bush's big lie that there was a link between Iraq and the War on Terror generally and the 9/11 attacks specifically, but they are finally realizing that they were duped big time, according to the latest New York Times/CBS News poll.

The poll found that 51 percent of those surveyed saw no link between the war in Iraq and the broader antiterror effort, a jump of 10 percentage points since June. That increase comes despite the regular insistence of the president and fellow traveling Republicans that the two are inextricably entwined.

As recently as Monday, President Bush defended the invasion of Iraq as essential to preventing terror attacks on the U.S. and said he expected troops to stay there through the rest of his presidency.

Meanwhile, 53 percent of poll respondents said going to war in the first place was a mistake, up from 48 percent in July. Some 62 percent said events were going “somewhat or very badly” in the effort to bring order and stability to Iraq.

Bush recorded a gain of four percentage points in how the public views his handling of terrorism, rising to 55 percent approval from 51 percent a week earlier, the highest approval rating on the issue since last summer following the arrests in Britain in a suspected terror plot to blow up U.S.-bound jetliners.

The president’s overall standing was nevertheless unchanged from the previous week, with 57 percent disapproving and 36 percent approving, far below the level Republicans in Congress would like to see as they prepare for elections in November.

Compounding the Republicans’ political problems, the survey reflected significant dissatisfaction with the way Congress was doing its job. Voters in the poll indicated a strong preference for Democratic candidates this fall.

A CALLBACK TO ARMS

In yet another sign that U.S. forces are stretched thin, the Marine Corps has received authorization to recall thousands of troops to active duty because of a shortage of volunteers for duty in Iraq and Afghanistan.

Up to 2,500 Marines will be brought back at any one time, but there is no cap on the total number of Marines who may be forced back into service in the coming years.

Colonel Guy A. Stratton, head of the manpower mobilization section, estimated that there is a shortfall of about 1,200 Marines needed to fill positions in upcoming unit deployments.

The call-up affects Marines in the Individual Ready Reserve, a segment of the reserves that consists mainly of those who left active duty but still have time remaining on their eight-year military obligation.

Generally, Marines enlist for four years, then serve the other four years either in the regular Reserves, where they are paid and train periodically, or they may elect to go into the IRR. Marines in the IRR are only obligated to report one day a year but can be involuntarily recalled to active duty.

UPDATE ON THE MAHMOUDIYAH RAPE-MURDERS


Iraq has launched its own investigation into the alleged rape-murder of a 14-year-old girl and murder of her family by American soldiers near Mahmoudiyah in March and want them tried in an Iraq court. You can be rest assurred that pigs will fly before that happens.

The gruesome murders have bolstered Iraqi allegations of misconduct by American soldiers, including illegal killings, beatings and other abuse.

U.S. authorities arrested five soldiers and Steven Green, a former private, in connection with the case. The active-duty soldiers faced a military hearing earlier this month to determine if they should be court-martialed.

Posted by Shaun Mullen at 3:39 AM
Email ThisBlogThis!Share to TwitterShare to FacebookShare to Pinterest