Are Pluto's Days As a Planet Numbered? 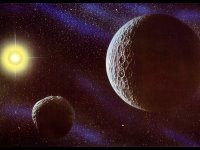 Pluto's days as a planet may be numbered.

Nearly 2,500 astronomers from 75 countries are gathering in Prague to draft a universal definition of what qualifies as a planet, as well as whether Pluto (depicted in the illustration with Charon, one of its moons) should keep that status. The recent discovered of an object larger and farther away from the ninth planet has left astronomers with two choices:

* Remove Pluto's status as a planet.

Conference participants hope to establish criteria for what qualifies as a planet, including whether they should be grouped by location, size or other means.

More here.
Posted by Shaun Mullen at 3:07 AM
Email ThisBlogThis!Share to TwitterShare to FacebookShare to Pinterest