No, Hurricane Katrina Wasn't 'The Big One' 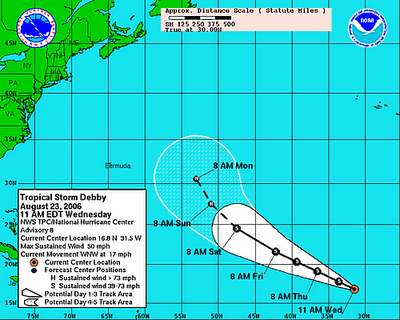 Tropical Storm Debby's projected path as of 11 a.m. EDT Wednesday
With Tropical Storm Debby churning across the warm waters of the Atlantic as the first anniversary of Hurricane Katrina approaches, Max Mayfield offers these words of wisdom:

People think we have seen the worst. We haven't.

Mayfield, who as director of the U.S. National Hurricane Center is probably the best known meteorologist in the U.S., says there is plenty of potential for a storm worse than Katrina, which killed 1,339 people along the U.S. Gulf coast and caused $80 billion in damage.
Says Mayfield:

I think the day is coming. I think eventually we're going to have a very powerful hurricane in a major metropolitan area worse than what we saw in Katrina and it's going to be a mega-disaster. With lots of lost lives.

I don't know whether that's going to be this year or five years from now or a hundred years from now. But as long as we continue to develop the coastline like we are, we're setting up for disaster.

Looking back nearly a year to the costliest natural disaster in U.S. history, and the third-worst hurricane in terms of lives lost, Mayfield said Katrina could have been a greater disaster.

More than two days before Katrina struck the Gulf coast last August 29, the hurricane center had predicted its future track accurately and also warned it could become a powerful Category 4 storm on the five-step Saffir Simpson scale of hurricane intensity.

New Orleans was squarely in the danger zone, and local emergency managers and residents had plenty of time to prepare. Trouble was, the city' levees gave way because of shoddy construction and the federal response was belated and then botched.

Many of the deaths involved residents did not take evacuation warnings seriously.

THE WORST-CASE SCENARIO
Mayfield's greatest fear is a major hurricane racing up the east coast to the New York-New Jersey area, where millions of people live.

One of the highest storm surges possible anywhere in the country is where Long Island juts out at nearly right angles to the New Jersey coast. They could get 25 to 30 feet of storm surge . . . even going up the Hudson River.

Now that would truly be The Big One.
Posted by Shaun Mullen at 3:28 AM
Email ThisBlogThis!Share to TwitterShare to FacebookShare to Pinterest