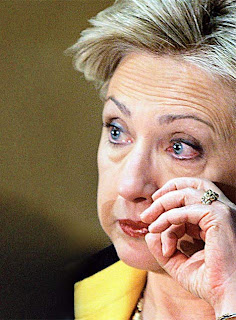 That sound you hear is all the whinging and spinning going on at the Hillary Clinton pity party.

Negative spin -- which is to say lowering expectations -- has become an integral part of any smart political campaign, but the hankie wringing on behalf of a candidate who supposedly had the nomination wrapped up before the first primary vote was cast is extraordinary.

This is because she is so not out of the race at this point that it's sheer folly to suggest that she is.

Clinton's handlers said that she expected to lose the caucuses in Washington state and Nebraska, as well as the Louisiana primary, to Barack Obama yesterday, which she indeed did although by larger margins than expected, as Obama further closed the delegate gap.

But now those handlers are saying that the rest of the February primaries -- including the 238-delegate Potomac Primary on Tuesday involving Maryland, Virginia and the District of Columbia -- all favor Obama.

Now how can this be?

How can the handlers for a candidate who had the race by the short and curlies only a few weeks ago be conceding a region that is chockablock with Clinton's core constituents -- women, Latinos and lower-income Democrats -- while saying that she will rebound in March and everything will be okey-dokey?

While Obama leads in the Potomac Primary polls, they have been notoriously unreliable this campaign season, and Virginia especially seems less than a slam-dunk for him. In the end, there may be a very simple explanation for why the MSM seems so receptive to the negative spin:

Many reporters and editors live in the Virginia and Maryland suburbs of Washington and many of them and their friends are going to vote for Obama. So there!

The Clinton campaign leaves nothing to chance. The negative spin is as finely scripted as is time the candidate is to spend shaking hands or shedding tears. But have we entered the realm of self-fulfilling prophecy and Clinton is in genuinely big trouble even with those much yakked about superdelegates?

After reading this dispatch I had to wonder what the heck is going on:

"The Clinton camp hopes to stop the Obama bandwagon by winning Texas and Ohio primaries on March 4, after which Mrs Clinton is planning to call on party grandees including Nancy Pelosi, Speaker of the House of Representatives and Harry Reid, the party's leader in the Senate, to persuade Mr Obama to stand down."

The notion that Clinton believes she can snap her fingers and everything will suddenly fall into place seems preposterous given that we are in the midst of the most exciting Democratic primary race since forever and caving in is not in the Obama lexicon.

Posted by Shaun Mullen at 6:30 AM
Email ThisBlogThis!Share to TwitterShare to FacebookShare to Pinterest