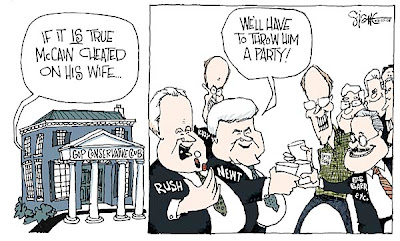 McCain's general election campaign is not off to a smooth start. First, his opening salvo focused on Obama's commitment to public financing promises -- whoops. Next, his campaign responded to the (grossly irresponsible) NYT article with an impulsive, overbroad "never helped any lobbyists ever" denial – thus opening himself to more unfavorable press.

These tactical misfires won't sink his campaign by any means. They do, however, raise larger concerns. Simply put, McCain hasn't proven himself to be a good campaigner yet. In fact, there are many reasons to think that he'll actually campaign poorly.

-- PUBLIUS
Watching senator attempt to regain some lift as she paraglides into history is almost enough to evoke pity. Almost. The come with their own boundless reserves of self-pity so further reinforcements seem unnecessary to me. And I suppose they could somehow still find a brutal, soul-grinding path to the nomination. But we've learned something important these past couple of weeks.

is a terrible manager of people. Coming into a campaign she had been planning for, what, two decades, she was so not ready on Day One, or even Day 300. Her White House, if we can glean anything from the campaign, would be a secretive nest of well-fed yes-people, an uncontrollable egomaniac spouse able and willing to bigfoot anyone if he wants to, a phalanx of flunkies who cannot tell the boss when things are wrong, and a drizzle of dreary hacks like Mark Penn. Her only genuine skill is pivoting off the Limbaugh machine (which is now as played out as its enemies). Her new weapon is apparently bursting into tears. I mean: really.

Now that John McCain's hair has been mussed a bit by New York Times reminders of his ties to lobbyists, Mitt Romney may be rethinking his decision to suspend his campaign in order not to "be a part of aiding a surrender to terror."

I am usually quite proud of being a conservative. I know in my heart that the only way to enjoying liberty under the law and equality of justice is through the application of conservative principles to government and society. And I am usually proud of the rational, reasonable basis on which most conservatives see the world and evaluate people and events.

That’s why it embarrasses me to no end to see fellow conservatives who actually believe that Barack Obama is some kind of "Manchurian Candidate" sent by Muslims to undermine American society. Or that Obama is a closet Muslim just waiting to take power before unmasking himself. Or perhaps most bizarrely, since Obama was born to a Muslim father, he is a Muslim whether he wants to be or not and that Muslims elsewhere will not let him forget his heritage.

If Hillary Clinton wanted a graceful exit, she'd drop out now—before the March 4 and primaries—and endorse Barack Obama. This would be terrible for people like me who have been dreaming of a brokered convention for decades. For selfish reasons, I want the story to stay compelling for as long as possible, which means I'm hoping for a battle into June for every last delegate and a bloody floor fight in late August in Denver. But to withdraw this week would be the best thing imaginable for Hillary's political career. She won’t, of course, and for reasons that help explain why she’s in so much trouble in the first place.

The school that hosted the greatest football scandal in NCAA history has topped itself by agreeing to host the George W. Bush library after The Decider shuffles off his presidential coil next year.

The Hillary Clinton campaign has tried just about everything that it can to derail Barack Obama's improbable rise to front-runner status in the Democratic primaries. Now it has begun circulating a photo of the young politician pandering to Muslims abroad by adopting a native costume, calling into question his commitment to Christianity and opposition to Islamist terror.

Dating and campaigning have something in common. The reek of desperation does not act as an aphrodisiac on potential suitors.

What is this foolishness? Obama is pure and not a politician and Hillary is "tainted"?

Does anyone get to be a presidential candidate in our country without being a politician?

Does anyone run for political office -- a humiliating and exhilarating marathon -- without wanting power more than sleep?

Come on. Get real. You and I could never endure the punishment of debates, of columnists who don't fact-check, of swift-boaters, of dumb pundits and corrupt colleagues, without the lust for power being the overriding emotion in your life.