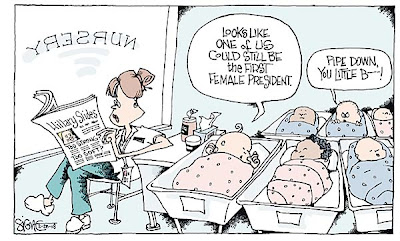 Lanny ' claim that it's hard to criticize Barack Obama without being accused of playing the race card seems to me to be pretty typical of the myopia of the campaign. I've never heard anyone allege that Hillary Clinton's criticisms of Obama's health care plan involved a "race card." Nor have I heard her criticisms of his support for the 2005 energy bill describe in such a way. Nor have I heard the general idea that she has more political experience dealing with the right-wing attack machine described that way. What's more, in the campaign I watched 's campaign was actually doing pretty well with those criticisms and then wound up running off the rails later.

After teasing us for a year, Mike Bloomberg is putting his billion dollars back in his wallet and leaving a few platitudes on the plate instead.

There are a few themes developing that should be called out now for what they are.

And while this is happening, John McCain will just talk about how terrible this stuff is but he can't stop it; and the media tut tuts it 24/7. And yet FoxNews and Howie Kurtz will keep having these same people on their shows and in their columns and treat them like the respectable contributor to the public discourse they believe them to be.

I can't wait for the moment that the right finally understands it needs positive arguments to defeat Obama, not smears.

The major issue at hand is that John McCain's love among moderates and liberals is that they think that he secretly sympathizes with them. He did work to cultivate an image as being working with Democrats when they're right, and trying to lead his party to the sensible center on some issues. That's why a lot of people like the old guy, and not entirely without reason.

Ultimately, though, John McCain's embrace of the right will no doubt harm him with these groups, who will probably finally put it together that he isn't really one of them, and his hagiographical press coverage has made the public quite unaware of his stances on many issues, as well as the personal baggage he carries. In essence, most of the people who dislike McCain already aren't likely to change their minds, while the McCain fans will no doubt be presented with some new evidence to test their affection for him. The same might very well be true of Barack Obama, but Obama doesn't really have any damning stuff in his back yard that falls into the "secret to everyone" camp--unless anyone really thinks that all this Rezko business is really going to catch on after about fifty failed attempts.

The media fluff fest on Mr. O. is ending.


Although [John McCain's] campaign is run by lobbyists; and although his dealings with lobbyists have generated what he, when judging the behavior of others, calls corrupt appearances; and although he has profited from his manipulation of the taxpayer-funding system that is celebrated by reformers -- still, he probably is innocent of insincerity. Such is his towering moral vanity, he seems sincerely to consider it theoretically impossible for him to commit the offenses of appearances that he incessantly ascribes to others.

Such certitude is, however, not merely an unattractive trait. It is disturbing righteousness in someone grasping for presidential powers.