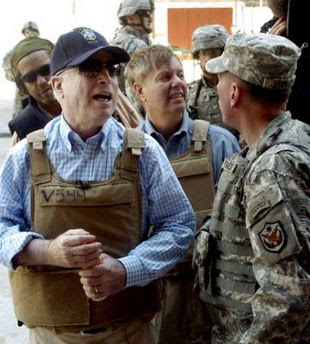 McCain's infamous Baghdad shopping trip
In what is a miscalculation of epic proportions, John McCain says he will stake his fall campaign on having been right about the Iraq war.

With the exception of this stale sales pitch having an built-in appeal for the presumptive Republican nominee's base, who are a mere fraction of the voters that McCain needs to give Barack Obama or Hillary Clinton a run for their money, it is wrong every which way:

It is backward looking at a time when most Americans are sick and tired of the war and its tremendous drain on the economy and want to look forward. The last thing they will want to hear is McCain's view that keeping U.S. troops in Iraq for 100 years "would be fine" with him.

McCain will tout the success of the Surge strategy, but that is a fiction because the military gains are in all likelihood temporary, are substantially based on bribing and arming former insurgents, and they have not been matched by political gains.

Furthermore, it is now obvious that the downturn in sectarian violence is in part a result of the success of sectarian cleansing in key urban neighborhoods, giving them a ghost town appearance, while the violence in Basra and some other urban centers continued unabated.

McCain's miscalculation is all the more egregious if Obama is the Democratic nominee since he was one of the few congressfolk to oppose the war from the get-go and has pledged to bring American troops home by 2009.

OBAMA & THE WAR
Now that Barack Obama is acknowledged as being the real deal and not a flash in the electoral pan, some of his opponents have tried to distort his record on Iraq.

Michael Crowley, writing in The New Republic, reminds us that Obama was against the war before there was a war to be against, but the record shows that neither his opponents nor supporters have gotten it right.

"The press's failure to closely examine Obama's Iraq record is a source of perpetual frustration for the Clinton camp--and a fair gripe. It has allowed Obama's supporters to mythologize him as a fearless crusader. At the same time, it has enabled the Clintons to mount overzealous attacks on his record.

"Many of the Clintons' specific attacks on Obama are unfair distortions. But it's also true that a close look at his Iraq record reveals more nuance than the Obama campaign acknowledges. It shows that Obama is cautious and pragmatic, hardly immune from political pressures, and sometimes prone to shading his rhetoric for convenience. But, ultimately, in substantive policy terms, he is also open to intellectual reexamination based on changing events. This may not be quite the Obama of the popular imagination, and it is certainly not the Obama of his own campaign ads. Nor is it, after 2002, substantially different from Hillary Clinton's own course on Iraq. But it is no 'fairy tale,' either."

CLINTON & THE WAR
Hillary Clinton, of course, voted for the infamous Senate resolution in support of the Iraq war. While there is nothing that she can do to change that, she has tacked and yawed so incessantly since then about where she stands that it's enough to make a voter seasick.

Steven Zunes, writing at Spero News, reminds us that even though Clinton was repeatedly warned that the Bush administration's rationales for going to war failed to hold water, she bought into them lock, stock and barrel and her peregrinations since show how she would approach international affairs and security policy.

"Whether Senator Clinton lied in order to frighten the American people into accepting a costly U.S. takeover of that oil-rich country or whether she was simply naïve and ignorant, her false statements regarding Iraq’s WMD capabilities - given that this was her central argument in justifying the invasion - raises serious questions regarding her fitness to become president of the United States. There is little reason to doubt, therefore, that she would again be willing to either lie or to blindly accept transparently inaccurate and alarmist intelligence data in order to lead America into another tragic war."

THIS NEEDS TO BE A CAMPAIGN ISSUE . . .
Barack Obama wants to ban the use of cluster bombs while Hillary Clinton and John McCain don't.

What makes the use of these submunitions, which are miniature bombs nested inside a mother bomb, so insidious is that they drop beneath tissue parachutes and are magnets for unsuspecting Iraqi children.

Some 82 countries have signed the Wellington Declaration to ban cluster bombs, but don't expect the U.S. to join them anytime soon.

Russ Wellen has an excellent Q&A on the matter at Scholars and Rogues.

More here.
. . . AND THIS DOES, TOO
Like neary 10 million other veterans, I finished my college education on the GI Bill, but some returning veterans are finding it harder to make it through college than making it through Iraq.

This is because while the original GI Bill provided full tuition, housing, and living costs, it was scaled back to a peacetime program in the mid 1980s that pays a flat sum, usually no more than about $9,600 a year for four years - no matter what college costs and it usually costs a heap more.

Now, five years into a war that will last at least 95 more if John McCain has his way, there is support building in Washington to return the GI Bill to a wartime benefit footing, but the White House and Pentagon are resisting the move for an unpleasantly obvious reason:

With an all-volunteer military they fear that too soldiers will shed their uniforms for college and civilian life.

THE MYTH OF THE SURGE
As alluded to above, a key to the "success" of the Surge has been the enlistment through bribes and weapons of 30,000 or so Iraqis into what is loosely called The Awakening.

People whose loyalty can be bought are allies as long as the lucre keeps coming, while the people who haven't been bought are left deeply aggrieved.

More here.
THE SCALES FALL FROM CONSERVATIVE EYES
Senator Tom Coburn, the way conservative Oklahoma Republican, startled people attending a town meeting in Muskogee the other day by stating that "I will tell you personally that I think it was probably a mistake going to ."

But then things got really weird: Coburn is refusing to elaborate except to say that he did not believe the U.S. could withdraw from Iraq and had to stay.

I quoted this here today...
And I raised the question, is the use of cluster bombs terrorism?
chamblee54

I think it's going to come down to the economy.

Americans have become tone deaf and complacent about Iraq... especially with the violence down measurably (although nothing close to where it should be).

And he is already on record saying that he doesn't have a clue about the economy.