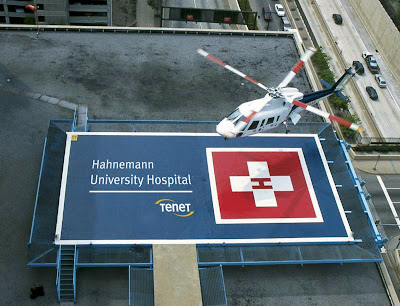 One of the reasons that the has the best health care system in the universe (and also the most expensive, but that’s another story) is the proliferation of so-called Level 1 Trauma Centers.

In many areas, if your elderly Uncle Leo trips on his shih tzu in the lobby of his condo and breaks a hip, he'll be taken to a nearby emergency room. But if Uncle Leo falls from a scaffold at a job site, is impaled on a piece of rebar and his life is threatened, he'll be airlifted to a Level 1 center.

By definition, Level 1 centers must have a certain number of surgeons and anesthesiologists who can give prompt care and critical care for just about any form of trauma.

So all Level 1 centers are pretty much the same, right?

A new study published in Archives of Surgery found that just because there is an equality of resources among Level 1 centers there are not equal outcomes. Translation: There are wide variations in survival rates.

Highlights of the study:

* Among patients with severe injuries, the overall mean survival was 35 percent. Ten centers performed significantly worse and nine did significantly better. Survival rates for the severely injured at one center reached 100 percent.

* In the most extreme example, survival rates for patients with severe penetrating injuries ranged from zero to 100 percent.

The study's authors concluded that:

"The current process of trauma center verification may need to move beyond personnel and process measures to incorporate risk-adjusted outcome measures when determining trauma center status."


The study did not cite trauma centers by name and did not account for a most important variable -- patient demographics -- which certainly can be a factor.