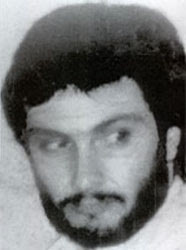 May he rot in hell.
Posted by Shaun Mullen at 5:40 AM
Email ThisBlogThis!Share to TwitterShare to FacebookShare to Pinterest

This might be the beginning of Lebanon's response to a series of assassinations of prominent politicians beginning with Rafik Hariri. Tit-for-tat is a terrible game, but sometimes there's no choice.

Muslims Against Sharia congratulate the organization responsible for elimination of terrorist Imad Mugniyeh on a job well done!