The Slow-Motion Implosion of Hillary Clinton's Campaign: It Took a Village 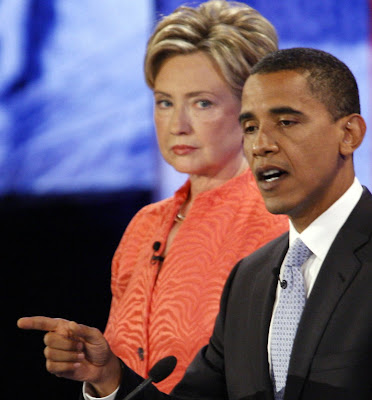 It's not a good sign when the post-mortems are pouring in and you're not dead.

But that is what is happening to Hillary Clinton although her latest and possibly last firewall -- the and primaries -- is still eight days away and she still maintains the lead in some national polls.

As it is, some bloggers, myself included, have noted for some time that was in trouble. My own catharsis was expressed in a post headlined Why Hillary’s Coronation Is on Hold back on December 17.

Now the mainstream media has caught up and is echoing the obvious:

* The strategy of running as Ms. Inevitable has been a disaster.

* There was no Plan B for her to fall back on when Plan A came a cropper.

* An inattention to detail, notably organizing on the ground, matched by a misallocation of funds.

A fundamental misreading of the national mood.

The point at which the Clinton campaign's slow slide became a headlong rush was the run-up to the South Carolina primary on January 19.

That was when her husband and other race-baiting surrogates unintentionally unleashed a backlash that reverberated far beyond that state that in the eyes of some voters contrasted the campaigns of a dirty-dealing Washington insider and a fresh-faced outsider.

There was secondary damage as well: The concept of a Bill and Hillary team presidency didn't fly in 1993 and the prospect of there being a rerun in 2009 is a huge turnoff to some voters.

Less obvious is that Clinton's disastrous campaign has been a team effort and she could not have done it without the help of three other key players -- George Bush, Barack Obama and an electoral pump primed for change.

Bush has been a disaster in so many ways in the last seven-plus years, Obama has caught lightning in a bottle with his vision of a new America and voters have transformed his improbable candidacy into a phenomenon.

does not need my sympathy. After losing the last 11 primaries and caucuses by wide margins, she needs a miracle. But while my head is with Obama and he is doing a pretty good job of winning my heart, I believe to be a decent person who did a lousy job of doing her homework.

Although most voters would put it in kinder terms, in the end Clinton's Achilles heel was that too many voters saw her as a George Bush in skirts. She shares much of the blame for that, but it took a village.

Or maybe Richard Nixon in a pantsuit. I hope that phrase isn't copywrited .