McCain: It's Not About the Sex, Stupid 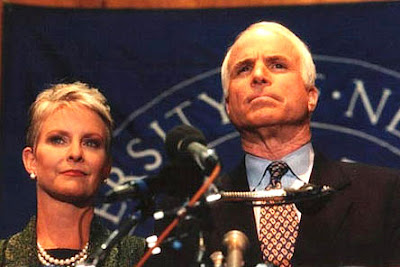 While attitudes toward adultery have softened in the , it still never would be confused with France of Italy, to name two countries where the extramarital affairs of public officials are no big deal.

Hence a report that presumptive Republican presidential nominee John McCain, whose philandering destroyed his first marriage, fooled around with a lobbyist during his second and current marriage, has quickly become a media firestorm. And yet another delicious opportunity to watch right-of-center commentators try to work their usual hypocritical triage. That is, McCain is being treated differently because he has a Republican penis and not a Democratic one.

Whether McCain had sex with that women is almost beside the point. More to the point is that some of his aides were troubled by how the relationship appeared, let alone what it might actually consist of.

More important still is whether 71-year-old McCain did favors for 41-year-old lobbyist Vickie Iseman. That happens all the time in Washington with or without sex. But if McCain did anything out of the ordinary for her -- notably whether he sought to intervene in a federal regulatory process to return favors as he did in the Keating Five ethics scandal -- it undercuts his claims after that scandal nearly ended his political career that he would hold himself to the highest standards and his latter-day reinvention as a scourge of special interests.

The fact of the matter is that even conservative Republicans sometimes let their penises do the talking even if no president of the GOP persuasion has gotten a blow job in the Oval Office as far as anyone knows. But when a conservative Republican wanders off the reservation and engaged in any kind of turpitude – sexual, ethical or otherwise -- they deserve every bit of scorn that can be heaped on them because they're card-carrying members of the Family Values party, whose motto is we're better than everyone else and we're gonna tell you how you should live your life.

McCain and Iseman tell The New York Times that they were not romantically involved, but neither have addressed whether the man who was for waterboarding before he was against it (or is it the other way around?) again violated the public trust, which is a helluva lot more important as a prospective president than whether he violated Cindy McCain's trust.

McCain and the other members of the Keating Five got off easy. If he cannot prove that his professional relationship with Iseman was above bounds, then he is unfit to carry his party's torch let alone succeed a man who has done a pretty fair imitation of running the U.S. into the ground because, in large part, moral and ethical considerations had no meaning to him.

Posted by Shaun Mullen at 2:42 PM
Email ThisBlogThis!Share to TwitterShare to FacebookShare to Pinterest