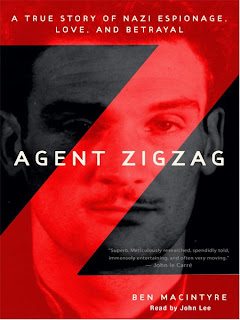 Was there a more enigmatic and successful World War II double agent than Eddie Chapman?

I don’t think so.

Chapman, a charming con man, philanderer, safecracker and self-taught explosives expert, offered to work as a spy for the Germans in 1940, but gave himself over to the British after being parachuted into in 1942 with a wireless set, revolver and cyanide pill with instructions to sabotage an aircraft factory.

Repeatedly risking his life, Chapman fed an extraordinary amount of vital disinformation to the Nazis, and drawing on his base instincts, amorality and extraordinary survival skills, fooled his German handlers all the way through to the end of the war.

Thanks to the declassification of massive sections of Chapman's long secret MI5 files, Ben Macintyre has now written far and away the best book of the several about the double agent – Agent Zigzag: A True Story of Nazi Espionage, Love, and Betrayal (Harmony Books, 2007).

Agent Zigzag doesn't just read like a spy thriller. It is one, replete with double crosses, dramatic escapes, tortuous interrogations and beautiful women, most of whom Chapman ultimately betrayed in love. The ability of Chapman to keep his stories – and identities – straight is in itself amazing.

The Nazis considered Chapman to be a hero and awarded him the Iron Cross, the only Brit to receive that high honor. For their part, the British pardoned him for his pre-war crimes, the only citizen for whom this usual step was taken.

In describing Chapman's dismissal as a double agent at war's end following a rare indiscretion regarding who he was, Macintyre writes that Chapman was:

"[T]he worst of men, in whom war had brought out the best.

"Chapman, by rights and inclination, might have been expected to react to his sacking with indignation. Another man might have felt the sting of rejection, the cold humiliation of the double cross. But as always, Chapman zigged when another man would have zagged."

I first stumbled upon Macintyre's mastery in The Man Who Would Be King: The First American in Afghanistan. This equally incredible story concerns Josiah Harlan, a Pennsylvania Quaker who sailed to in 1822 to erase the memory of a fiancée who jilted him and married another man.

Macintyre drew heavily on Harlan's beautifully written but unpublished journals and with Agent Zigzag got access to some 1,800 pages of hitherto secret files, but beyond this resourcefulness he writes with great style and humor.

Triple Cross, a mediocre 1966 movie starring Christopher Plummer as Chapman, did not do justice to his many exploits. Macintyre's Agent Zigzag now provides a wonderful opportunity to do it right.