Dem Race: If It Ain't Brokered, Don't Fix It 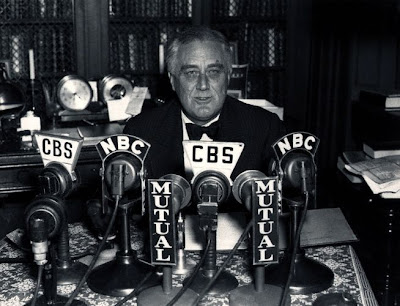 FDR was the last brokered convention nominee to win election
The term brokered convention is being thrown around with reckless abandon these days. Hillary Clinton's campaign is doing a pretty fair imitation of being panicked over Barack Obama's thus far unstoppable advance while the Democratic Party establishment and much of the punditocracy are in a near meltdown over the implications of a knock-down, drag-out national convention battle between the two candidates.

First of all, everybody take a deep breath. Thank you. Feel better now?

Second of all, there hasn't been a truly brokered national convention since before the era of presidential primaries and caucuses in the 1970s and there probably isn't going to be one this year, either.

Third of all, beyond the sheer drama of the Clinton-Obama showdown, a tough fight between now and even into the convention in Denver in late August will not fracture the party if primary and caucus voters are not relegated to a secondary status because of a manipulated superdelegate pool. If that happens, all bets are off.

* * * * *
In my catholic view, there have to be at least three candidates for a convention to be truly brokered. Without that third candidate to also broker his delegates as was the case with the Democrats in 1952, as was anticipated to be the case in 1968 and almost was the case in 1988, there can be no real horse trading.

Stevenson gained enough support through brokering with Kefavuer, who got the vice presidential nod, to win on the third ballot. Stevenson and Kefauver lost to a ticket consisting of World War II hero Dwight D. Eisenhower and California Representative Richard M. Nixon in the general election.

With the by then unpopular Vietnam War as the backdrop, President Johnson decided to not seek re-election in 1968. Until the assassination of New York Senator Robert F. Kennedy, it appeared that the 1968 convention would be a three-way fight between Kennedy and Minnesota Senators Hubert Humphrey and Eugene McCarthy.

After RFK's death, South Dakota Senator George McGovern stepped in to try to fill the void left by RFK, but received little support. McCarthy and McGovern finished a distant second and third to Humphrey on the first convention ballot, eliminating the need for brokering. A ticket of Humphrey and Maine Senator Edmund Muskie lost to former Vice President Richard Nixon, with Maryland Governor Spiro Agnew as his running mate, in the general election.

As the 1988 convention approached, Massachusetts Governor Michael Dukakis, Tennessee Senator Al Gore and civil rights leader Jesse Jackson all had a sizeable number of delegates because, as was the case this year, there had been no clear Super Tuesday winner.

But Gore got out of the way of the Dukakis bandwagon, the party establishment threw its weight behind this uninspiring candidate, and he easily out balloted Jackson to capture the nomination. Dukakis denied Jackson the vice presidential slot, giving it to Texas Senator Lloyd Bentsen. The Dukakis-Bentsen ticket was crushed by Reagan Vice President George H.W. Bush and his running mate, Indiana Senator Dan Quayle, in the general election.

Woe be the winner of a brokered convention, who carries the stigma of being a weak candidate into the general election. You have to go all the way back to 1932 and Franklin D. Roosevelt for the last brokered convention in which the nominee won it all.

* * * * *
In addition to the Democrats' embrace of a primary-caucus system, another 1970s-era presidential campaign "reform" as a result of their disastrous 1968 convention was the creation of convention superdelegates who are current or former elected officeholders, typically governors, U.S. senators and representatives, and party officials.

Because superdelegates will make up about a fifth of the delegates at the Denver convention, they have taken on an outsized significance since Obama has drawn neck and neck with Clinton. Following Obama's victory in the Maine caucuses on Sunday and going into the Potamac Primary votes today, here is the delegate breakdown, according to The Associated Press, with 2,025 delegates need to take the nomination:

Because of the ties that bind Clinton and husband Bill to the party establishment, it is assumed that she will have the advantage in potentially tie-breaking superdelegates, and Mrs. Clinton indeed would seem to have a large lead in them at this point.

But nearly half of the total of 795 superdelegates have not made endorsements or have not been selected, besides which superdelegates are not required by party rules to vote for the candidate they endorsed.

Enter Donna Brazile, an uncommitted superdelegate who is a top Democratic National Committee member and was Gore's 2000 campaign manager. She believes that sperdelegates should play a role but not the pivotal role in determining the candidate:

"If 795 of my colleagues decide this election, I will quit the Democratic Party. I feel very strongly about this."

While Brazile's gauntlet throwing down could have a clarifying effect, it won't.

That is because the candidates are working feverishly behind the scenes to secure every delegate of any stripe that they can. To that end, Clinton had a sitdown with John Edwards last week and Obama was to meet yesterday with the presidential campaign also-ran until a last-minute cancellation.

Tad Devine, a Democratic strategist and Gore's chief strategist in 2000, lamented in a New York Times op-ed piece that if superdelegates determine the nominee, let alone before primary and caucus voters have had their say, Democrats risk losing the public trust:

"The perception that the votes of ordinary people don't count as much as those of the political insiders . . . could hurt our party for decades to come.

"The damage would be amplified if African-Americans or women, two of the party's key constituencies, feel that a candidate who represents their most fervent hopes and aspirations is deprived of a nomination rightfully earned by majority support from voters.

"Mrs. Clinton and Mr. Obama, and their campaigns, are pressuring superdelegates to pledge support to them before Democratic voters in the remaining primaries and caucuses have made their decisions. But Democratic leaders need to let the voters sort out which one of these two remarkable people will lead our party and, we hope, the nation."

Considering the way that congressional Democrats have squandered their 2006 mid-term election mandate, for Devine to assume that the Democratic Party has the trust of voters in the first place is laughable.

That noted, the temptation to take the decision as to who the presidential nominee will be out of the hands of voters and return it to the smoke-filled rooms in which virtually all party decisions of consequence were made before the reforms will be huge. While I anticipate that Clinton would have no problem with encouraging that while professing otherwise, Obama faces a tougher test because his hope-and-change mantra runs counter to the very notion that the voters who have flocked to him in such extraordinary numbers count less.

In any event, stay tuned.