Fixating on the Bun & Not the Burger 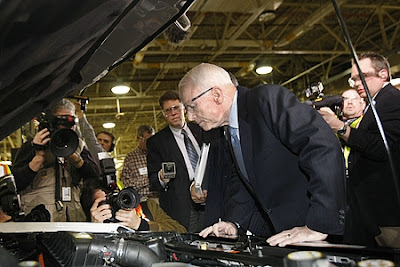 ANY LOBBYISTS UNDER THE HOOD, JOHN?

My defense yesterday of The New York Times story on John McCain and lobbyist Vicki Iseman was pretty tepid. The story does, after all, have all the earmarks of an over-edited investigative mishmash with a fair amount of loaded “wink wink, nod nod” language from which the reader is to infer things that the story never comes right out and says.

But one thing that the story did get right, hence my headline McCain: It’s Not the Sex Stupid, is that the presumptive Republican presidential nominee has been doing a pretty good job of fooling his supporters when it comes to his claim that he was chastened by his involvement in the Keating Five scandal. That should have ended his career but didn’t, and since then McCain has portrayed himself as a white knight who fights lobbyists and their special interests on behalf of us little guys.

The reality, as The Times story documents, is that McCain has continued to cuddle up to lobbyists when it suits him and his presidential campaign is chockablock with them.

That, of course, is lost on right-of-center bloggers like Michelle Malkin, Ed Morrissey and Rick Moran, to name a very few, who are predictably fixating on the bun and not the burger.

Times bashing is sooo easy even when your support for McCain is tepid, which is true of all three of the aforementioned pundits. McCain will raise some sympathy dough because of the story. Attention was diverted from the Barack Obama-Hillary Clinton CNN debate last night because of the story (which was bad for Clinton).

But the story, warts and all, further reveals McCain to be an idiosyncratic Washington insider who plays by the rules when it suits him. Yes, Barack Obama rubs shoulders with lobbyists, but the contrast between he and McCain -- if that is the fall line-up -- inevitably hurts the elderly gentleman from Arizona and helps the whippersnapper from Illinois in this year of contrasts and change.

All of the right-of-center whinging over The Times will be short lived. The fallout from McCain’s failure to keep a pretty damned big promise will not.

McCain denies the allegations and innuendos made in The Times story, of course, but it's unclear what he is denying because of an intentional lack of specificity on his part.

One thing is damned sure: Absent a detailed denial – and pigs will fly before McCain provides one – he will be spending a lot of quality time making further denials as the details of Iseman’s lobbying and McCain’s possible involvement drip drip drip out.

Blogger emptywheel, among others, is already on the case and making some possibly interesting connections:

"I find it a mighty curious coincidence that two of the companies for which Iseman was lobbying John McCain in 1999 and 2000--the time of their potentially inappropriate relationship--also happen to be the two television companies that championed the John Kerry smear, Stolen Honor, in 2004."

Photo by The Associated Press

Posted by Shaun Mullen at 6:40 AM
Email ThisBlogThis!Share to TwitterShare to FacebookShare to Pinterest

What bothered me about the reporting on the story was its emphasis on did they or didn't they have an affair. I could care less. But did he or didn't he use his influence for her. As you note, that is the question!

Well, if it wasn't the sex someone should have told the AP, CNN, MSNBC etc., that...because THEY certainly wanted to talk about this as a sex scandal, even before McCain's people began to hit back.

It is also an open question as to if this actually represented any new reportage at all OTHER than the insinuations of a sexual relationship between McCain and Iseman. If not the Times does leave itself open to the charge that they did nothing more than recycle old material they published back in 2000 as a "delivery vehicle" for the sex stuff.

Some of the criticism of McCain is unbelieveably weak, such as that he took trips that were not off limits according to the rules of the day but which would be not allowed now. The response "So What?" comes to mind...and its a question the Times never gets around to answering.

The further criticism that McCain wants to limit the power of lobbyists and yet has had contact with those lobbbyists also seems rather weak. If legislation about, say, cockfighting came before the Senate, was McCain supposed to throw a lobbyist from the ASPCA or PETA out of his office because he wants to limit the power of lobbyists as a whole? I dont buy it.

It actual favoritism could be shown, which the Times story didn't even try to show as they might have by contextualizing McCain's actions with either A) some representative sample of other well respected Senators, or B) comparing it with other action taken (or not taken) by McCain himself on similar issues not linked directly to lobbyists.

No reason is given by the Times as to why no such effort ever took place in the 3 months (or 8 years!) they have been working on this piece. One answer to that puzzle is that they were less interested in proving a pattern of unethical mbehavior (if it existed or not), and more interested in spreading the hot rumor they got ahold of.

Maybe there are legitimate answers/reasons for the Times approach to this story, but I haven't seen one yet.

Apropos of something: Do you personally think McCain had an affair with ISeman based on what the Times story said?

Is that belief of the court of law "beyond a reasonable doubt" variety, or something short of that?

I wonder if articles like this function like MSM Mad Libs...where you put just enough information out there so others can fill in the blanks based upon...well whatever individuals feel like filling in so it reads differently based upon where each individual is coming from.

It very "post modern" in a sense...but I'm not sure its an improvement.

Washington DC is a Cat 5 storm of temptation: cash, sex, booze, drugs and power. People want things and they're willing to pay in whatever coin will work. I'm guessing that the rate of arrest among congressmen exceeds that of the general public, even though they have so much power to control and conceal, and even though we have elected them on their reputations for honesty. There is a reason why senators don't usually get to be POTUS.

That being said, I think John McCain is cleaner than most, simply because he has stuck his neck so far out on the issue. So that makes him a target. Now that McCain is starting to criticize the golden one, the NYT is releasing its hounds.

Even assuming that there is something behind this article, the NYT shouldn't have published it. It's just too vague. You can't build your whole case on insinuation.