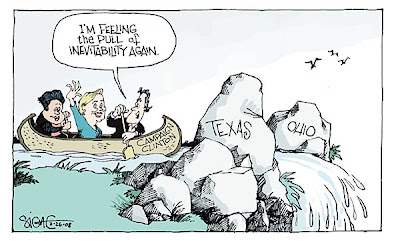 Obama won it - quite easily. It was overwhelming before the final break. But decisive nonetheless. I can't see how she manages to rescue her campaign now. And his momentum will continue. It's over, right?

If Barack Obama is sworn in next January, last night's debate may prove to be the turning point when American voters started seeing him as more than a gifted candidate. Hillary Clinton's job was to create doubts about his fitness to be President, but she ended up giving Obama the opportunity to demonstrate he has the qualities for the job.

As the long campaign has gone on, Obama's command and self-confidence have been visibly growing, thereby undermining the arguments about inexperience the campaign has tried to use against him.

In this last debate before the nomination is decided, he demolished them. In the general election campaign, John McCain will have to work very hard to prove that his years in qualify him to make better decisions about the future than Barack Obama.

NBC's coverage of its coverage? We are fair. We are great. How could anyone complain? What a joke.

I think this is probably the first debate (and there have been twenty) where a candidate really got clobbered and clearly lost. The debate in Philadelphia was the only other debate where I thought a candidate did poorly, but that was only Hillary's tortured answers on the driver's licenses for illegal immigrants question. Tonight, she hurt herself repeatedly from the first question to the last. I actually expect her to lose support as a result of her performance tonight, and I rarely think that about debates.

Tolstoy wrote that "happy families are all alike; every unhappy family is unhappy in its own way." In American politics, however, it's the unhappy campaigns that are all alike. In their growing desperation to stave off defeat, they tend to behave in very similar ways. And the Hillary Clinton campaign is currently a textbook case for three reasons:

The candidate is exhibiting multiple personalities, mellow one day and volcanic the next, seemingly incapable of settling on a consistent tone and approach. . . . The campaign is blaming the media for its woes. . . . Another standard practice for losers is to try and explain away primary defeats as either statistical flukes or aberrations. The Hillary people have been trying this all along.

"A friend of mine told me how the Marines train people in hand-to-hand combat," says retired Über-consultant Bob Shrum. "If your opponent has a weapon and you don’t, you pick up an ashtray, a lamp, a chair, anything you can, and keep throwing stuff. It seems to me that’s what the Clinton campaign is doing."

With a week to go before climactic tests in and , Hillary Rodham Clinton's campaign team has slipped into full recriminations mode.

Looking backward, interviews with a cross-section of campaign aides and sympathetic outsiders suggest a team consumed with frustration and finger-pointing about the apparent failure of several recent tactical moves against Barack Obama.

Looking forward, it is clear s team has only a faint and highly improvisational strategy about what to do over the next seven days. Simply put, there is no secret weapon.

If Hillary Clinton wanted a graceful exit, she’d drop out now — before the March 4 and primaries — and endorse Barack Obama. . . . Withdrawing would be stupid if Hillary had a reasonable chance to win the nomination, but she doesn’t.

President Bush predicted that voters will replace him with a Republican president who will "keep up the fight" in . "I'm confident we'll hold the White House in 2008," Bush told donors at the Republican Governors Association annual dinner, which raised a record $10.6 million for GOP gubernatorial candidates.

The Buzz on Saturday incorrectly described when a crowd applauded Barack Obama. It was when he blew his nose.