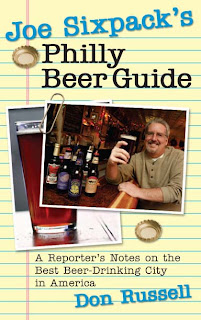 You can't be a real country unless you have a beer and an airline. It helps if you have some kind of a football team, or some nuclear weapons, but at the very least you need a beer.

In the interests of full disclosure, I have been drinking beer since I was 14 and Don Russell, the author of Joe Sixpack’s Philly Beer Guide, is a former colleague and old friend. Oh, and I'm a terrible beer snob. My first taste of beer was not a secretive swig from a quart bottle of Miller High Life behind my junior high school but a Heinecken from a German uncle's amply stocked beer refrigerator with his full approval. And so from the outset of my 40-plus year love affair with beer I was hooked on fuller bodied European brews and never developed a taste for watered down American brands.

Don Russell is a consummate journalist with whom I labored for many years at the Daily News, a street-smart tabloid that dispatched him to Phillies game in a toilet known as Veterans Stadium on a cold April day in 1998 with a notebook and measuring cup to check out a rumor that concession stand workers were short pouring beers.

The front-page headline the next day said it all:

"In a town where beer is a fundamental part of baseball lore . . . failing to give an honest pour is worse than striking out with the bases loaded.

And so was launched the career of Joe Sixpack, who has gone on to become an award-winning beer columnist (it's a tough job but somebody has to do it) and now the man behind Philly Beer Guide, a delightfully written and highly informative book on all things and beer.

Mr. Sixpack calls Philadelphia "the best beer-drinking city in America" and it's hard to disagree after a ramble through his 220-page treatise on some 450 neighborhood taverns, brewpubs and breweries in the City of Brotherly Suds and environs. It includes a chapter titled "Excuses to Drink," a terrific beer-centric guide for tourists and tips on treating hangovers.

The illustrations are by another old friend, Signe Wilkinson, the first attack Quaker (and woman) to win a Pulitzer Prize for editorial cartooning whose work I shamelessly lift and republish at Kiko's House.

WHY AMERICAN BEER IS SO MEDIOCRE

With nothing better to do on a Sunday afternoon other than . . . well, drink beer, I got to wondering why Americans embrace beers that are pale imitations of their foreign counterparts and while less filling do not taste great.

There is a reason why Buttwiper, Millard and Boors, which dominate the $90 billion a year U.S. beer market, use big-breasted women, golden retrievers wearing sunglasses and college frat house pranks to push their brews: Taste-wise, they don’t compare very well to what little competition they have – imports (about 7-8 percent of the market) and domestic craft beers (about 3-4 percent).

Prior to the advent of Prohibition in 1919, most American cities had at least one brewery (Philadelphia had a dozen) with beers and ales that compared favorably to their tasty counterparts in the , most often . This is because the owners and brewmasters were from the Old Country or were first or second generation Americans.But a funny thing happened in the years after the repeal of Prohibition in 1933. Brewery owners who survived those 14 dry years and the shakeout as shuttered breweries began to get back on their feet realized that they had a big marketing problem -- There wasn't a ready-made way to increase sales.

But with millions of beer drinkers returning home at the end of World War II, brewers stumbled on an idea startling for its ingenuity: If their beers were watered down, people would drink more of them.

I got Mr. Sixpack on the blower to put a head on this phenomenon. He explained that:

"After the war it wasn’t just beer getting dumbed down. It also was in all the food we were eating, the way we were living. This was more a product of where Americans were headed. This was the age of being bland, of TV dinners and the suburbs."

Mr. Sixpack and I share the view that what makes a beer good are the edges – the robust flavors that vary so much from one good brand to another.

But, he says, post-war beer lost those edges because brewers not only began watering down their product but also used cheaper grains and other ingredients, in part because there was a premium on supplies.

Surprisingly, Mr. Sixpack notes that the precedent for the move toward lighter beers was in before Prohibition, of all places, with the advent of lagers that were much less dense and flavorful than dark beers and ales.

So what is American taste?

Beers that are indeed watered down, explains Mr. Sixpack, but not because they necessarily are made wrong. Again, Mr. Sixpack:

all based on image. It's human nature that we associate ourselves with specific brands. AB (Anheuser Busch) has two completely different markets for Bud and Bud Lite. That's why people drive the car they drive. And some people do like being seen with an imported bottle in their hand at a bar."

Just not that many.

As it is, Heineken has not only slipped in quality in what would seem to be a conscious effort to mimic that American taste, it has celed its longtime title as the best-selling imported beer to , a Mexican beer. Kind of ironic considering that most Americans want to tighten the borders at a time when Mexican and Latin American foods, beers and other products have never been more popular.

"Sure, some Mexican beers are being consumed by immigrants, but the majority of drinkers are born-and-bred residents. Heck, sales of tortilla chips are now growing faster than potato chips. Isn’t that sort of a contradiction?"

Having lost the cachet of being a "special" import, Heineken is now trying to cash in on the popularity of Mexican beers and recently bought the marketing rights to Tecate and Dos Equis.

Would Frank Zappa approve?
Posted by Shaun Mullen at 5:11 AM
Email ThisBlogThis!Share to TwitterShare to FacebookShare to Pinterest

I'm a Milwaukeean and worked at Schlitz for three summers going to grad school. At that time in the sixties, SChlitz outsold Bud & Miller. Then the geniuses in the malt house decided to water down the product to get more profits and the beer fell off the charts. Nowadays, Schlitz is impossible to find.

But SAm Adams and Co. make some of the best beer around and in my Publix, costs less than Corona!

Selling water! Sheer genius. Now they sell it without any beer at all and get away with it.

I used to drink Yngling Porter, but it disappeared from the distributors in my area. Sam Adams I cannot abide. It has an unfortunate side effect involving my lower GI. I don't drink much any more. A little red wine and Guinness on draft. Heavenly.

Funny, I also agree and know, Schlitz is hard to find. But, when you do find it, is is cheap and worth it. I always tell people at the bar I manage, Jager's in Olde City Philadelphia, that I would much rather drink an old skool cheap ass brew (Schlitz, Black Label, etc.) than a fake (made with rice, force carbonated, mass marketed) cheap ass brew. Granted, I absolutely love the REAL beers...especially the original German ones at this moment. But, there is something about the realness of the old American REAL beers that I love. Maybe they just remind me of my youth...when I would steal Schlitz from my father at age 10!