What To Do About All Those Scandals? 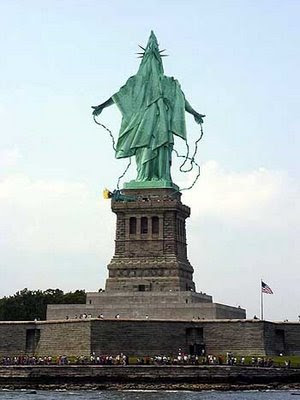 If the next president is a Democrat (and that is by no means a foregone conclusion) what if any investigations of Bush administration criminality and other misdeeds should be persued?

Or, should the Democratic president and Congress, in the spirit of a new era and an appeal to bipartisanship, wipe the slate clean?

The criminality and misdeeds include:


* The refusal of Alberto Gonzalez, Harriet Miers and other key adminstration officials to answer subpoenas in connection with the politically motivated firings of U.S. attorneys.

* The refusal to hand over to congressional investigators certain testimony from Vice President Cheney and other key administration officials in connection with the Wilson-Plame leak scandal.

* The official embrace of torture in contravention of the Constitution, treaties and conventions and common decency.

* Pre-9/11 CIA and other intelligence failures.

* The willful destruction of millions of White House emails sought by congressional investigators.

* A full accounting of the costs of the Iraq war.

* No-bid contracts given Halliburton and other firms working in Iraq and Afghanistan with close administration ties.

* The consequences of the multiple Bush signing statements.

Illegally spying on US citizens.