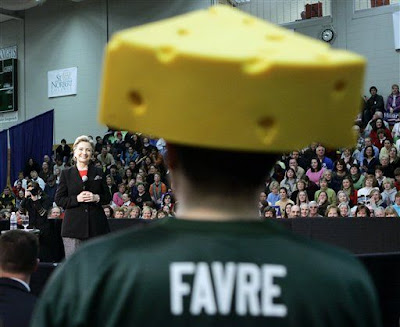 And so voters in yet another primary state that Hillary Clinton never took seriously enough in her march to inevitability have added more fuel to Barack Obama's improbable quest, putting her a step closer to possible electoral oblivion.

Another chapter was writ large in the extraordinary saga of the firestorm versus the firewall last night as Obama beat by a 58 to 41 percent margin in for his ninth straight win. To put 's loss in stark relief, there was nothing positive in her showing and she did almost as poorly as Mike Huckabee in his lopsided loss to John McCain in a state that she had been expected to win.

Obama also easily won the caucuses after a record turnout to increase his overall lead in convention delegates and the primary popular vote.

Losing and a big chunk of its 74 delegates should be a mere bump in the road for . But she now finds herself having to decisively win her firewall state primaries -- and on March 4 and on April 22 -- or her coronation may be on hold indefinitely.

A few days ago, seemed to have in the bag.

Like , she had a comfortable lead in the polls in a state tailor made for her with its large white working-class electorate. But also like , had an open primary which resulted in the seemingly unstoppable Obama not only siphoning off Democrats, but drawing in Independents and Republicans, as well.

Exit polls in showed that virtually every demographic group is trending toward Obama.

He continued to cut into 's core constituencies -- women and low- and middle-income voters, with voters from union households evenly splitting their votes between the two. Only Catholics and voters with only a high school education gave the edge, while voters said by a 63 to 37 percent margin that Obama would be more likely to defeat the Republican nominee in the fall.

A CNN exit poll found that the economy was the greatest concern of 44 percent of voters, followed by the war (28 percent) and health care (26 percent).

As it turned out, Obama already was campaigning in on the night of his big Potomac Primaries sweep of , and the , while was in . did campaign in , but she seemed to concede it as she had by spending more time in and . The later state resembles Wisconsin in many ways but is more racially diverse, a big plus for Obama.

Which begs the question of the hour if not the campaign: Having realized however belatedly that her strategy of running as Ms. Inevitable and wrapping up the nomination early while thumbing her nose at states with comparatively few delegates was a disaster, why has she continued to blunder so consistently and so badly?

Why, for example, does not even have a full slate of delegates for the primary even through her helpmate, Governor Ed Rendell, ordered a special extension of the deadline in a state that is shaping up to be enormously important to her survival?

Why does she continue to spin every setback as if it was only a matter of demographics, timing, money or plagarism?

Why does she continue to flip-flop on superdelegates and now, in a poke to the electoral eye, reportedly will go after Obama's pledged delegates?

The answer is that Clinton and her staff, even after a major shakeup, have yet to shed the feeling that she is The Chosen One and their hubris has drowned out the alarm bells that have been ringing so insistently since Obama caught the wind in the run-up to Super Tuesday. The campaign never had a Plan B and it's getting awfully late in the day to cobble one together.

Of two things we can be sure:

* A trending Obama can rightfully claim that he has national appeal after winning a northern swing state like Wisconsin, a bellweather Midwestern state like Missouri, a hardcore Democratic state like Maryland and a red state like Virginia based on his strength among independents, the key bloc in any presidential election.

* A desperate will need to ride the wave of mainstream media stories delving into every nook and cranny of Obama's past and present and hope that reporters find more than crumbs, hope that McCain turns his guns in Obama and not her, or that Obama makes an enormous gaffe in a coming debate.

But with every negative ad and negative comment from and her surrogates, every effort to rig the nominating process to give her an edge, every murky statement that the campaign will be clear about its intentions, she widens the perceptual gulf that Obama represents the fresh and new while she represents the tired and old.

American Debate, Captain's Quarters, CNN, The Guardian,
The New York Times, The Washington Post and Matthew Yglesias
contributed to this report. Photograph by The Associated Press

I hope that B. Obama wins and he will be the president in USA. He is the best candidate among all candidates - young, representative, reasonable, dynamic, wise man. He is real chance for change and it is very needed for USA and the world. He was not involved in war in Iraq, he did not vote for it ( in opposition to H. Clinton ). And H. Clinton is special kind of politician, who says another things and makes another things - she is just such hypocritical politician as Bush and McCain. Clinton, Bush, Mc Cain are compromitated politicians. And giving a new, next chance for such people would be not wise. It would be disaster, wasting of vote.