Politics & Never Having To Say You're Sorry 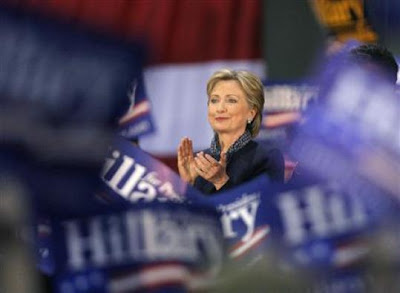 For someone whose handlers said they didn't expect to win any more February primaries, Hillary Clinton is campaigning in like her life depends on it. Which politically speaking, it does.

Despite numerous promises to take the high road after his mudslinging backfired in South Carolina, Bill Clinton is at it again, assailing Barack Obama because he wasn't a part of "any of the good things" that happened in the 1990s. Being a civil rights attorney, community organizer and state senator apparently are bad things.

Having dissed him in the past for not being conservative enough, Senator James Inhofe, R-Stone Age, and former Representative Tom DeLay, R-Disgraced, are now endorsing John McCain's candidacy and DeLay is even stumping for him.

Another Texas Republican, Representative Ted Poe, full of himself after House Democrats refused to pass the FISA bill before the Protect America Act expired, overlooked the fact that he and his fellow GOPers could have extended the PAA before rushing home for a 12-day recess in hyperbolically noting that "there is probably joy throughout the terrorist cells throughout the world that the United States Congress did not do its duty today."

After backing Senator Larry "Toe Tap" Craig and then not backing him and then backing him, the Idaho Republican Party has been struck deaf and dumb in the wake of a Senate Ethics Committee rebuke of Craig for his behavior after he was caught in an airport bathroom sex sting.


Speaking of deaf and dumb, Representative John Lewis and his staff aren't returning calls following the bombshell report that the civil rights pioneer planned to dump Mrs. Clinton and cast his precious superdelegate vote for Obama.

Senator Joseph Lieberman yet again revealed himself to be a closet fascist in explaining why his fellow Democrats are a bunch of mewling sheep and he is a self-righteous pimp for George Bush in voting against a measure to ban torture: "We have to allow the president to allow the toughest measures to be used when there is an imminent threat to our country. . . . It's not like we're burning people with hot coals."

After trying to pin all kinds of dirt on Obama without much success, his detractors have finally hit paydirt: They claim that he was a lousy Harvard Law Review president because the volume he edited has been the least cited in 20 years. A few more skeletons like this one and the guy will be toast.

One of Hillary Clinton's more reliable punch lines is that "Speeches don't put food on the table." True enough, unless you're the Clintons and your husband's speechifying has been one of the principal sources of income for your campaign.

Photograph by Matt Sullivan/Reuters
Posted by Shaun Mullen at 6:41 AM
Email ThisBlogThis!Share to TwitterShare to FacebookShare to Pinterest

Anonymous said...
This comment has been removed by a blog administrator.
3:58 AM