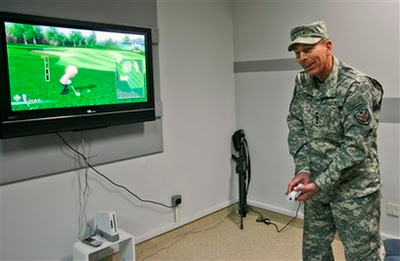 In what at first blush would seem to be an unusual acknowledgement that presidential power actually has limits, the Bush administration says that it has dropped a provision from the 's pending business deal with the Iraqi government under which it would defend Iraq from both internal and external security threats.

It may well be that the president's handlers have realized that trying to ram through the deal in the form of something other than a treaty, which would not require congressional approval, would provoke too great a backlash, and Defense Secretary Gates tacitly acknowledged as much this week.

But that explanation runs counter to the reality that George Bush has said in word and deed many times over the last long seven years that his power is pretty much limitless, most recently in yet another of his draconian signing statements, this one attached late last month to a defense spending bill that created a law banning the use of taxpayer funds to establish permanent bases in Iraq.

In the signing statement, the president yet again gave Congress the finger in asserting that as commander in chief he has the power to bypass that law.

The business deal, as I insist on calling it, would provide a long-term troop commitment in return for first dibs at 's vast oil resources. Its technical name is "A Declaration of Principles for a Long-Term Relationship of Cooperation and Friendship Between the Republic of Iraq and the . " (Text here.)

So what's really going on?

Although no presidential loyalist would put it in these terms, the reality check is that the White House has made such a hash of its Iraq "policy" that it has slowly come to realize one carelessly tossed match will reignite a civil war tamped down by the self-imposed exile of radical Shiite cleric Moqtada Al-Sadr and the military successes of the Surge. (See "The Same Game" below for a pungent example.)

Military is in italics because that was only half -- and in retrospect the easiest part despite the considerable blood shed by U.S. troops -- of the Surge stragegy, the other part being a good-faith effort by Prime Minister Nouri Al-Maliki to use the window of opportunity that those military successes afforded him to rev up national reconciliation efforts.

What has happened, of course, is that Al-Maliki and his Shiite henchmen have continued to act in bad faith knowing that Washington would not lean on them.

There has been no progress toward reconciliation. Zip, zero, nada, while the Sunni minority is busily consolidating its modest gains in the expectation that it won't be invited to share power any time soon.

The game playing is the White House's belated recognition of this sad state of affairs, if not that it is mostly to blame, hence the removal of the crucial internal and external security threat clause from the business deal. This is because the clause not only couldn't pass congressional muster, but represented long-term coup insurance for Al-Maliki and without it his sorry ass is no longer covered.


Is this to say that the White House would approve a coup, however tacitly? Not exactly, but with the clause in place the U.S. had a whole lot less leverage.

The need for that leverage was anticipated by Steven Biddle, who in a March 2006 game plan helpfully dredged up by Eric at Newshoggers, wrote that:

"[T]he must threaten to manipulate the military balance of power among Sunnis, Shiites, and Kurds to coerce them to negotiate. should use the prospect of a U.S.-trained and U.S.-supported Shiite-Kurdish force to compel the Sunnis to come to the negotiating table. At the same time, in order to get the Shiites and the Kurds to negotiate too, it should threaten either to withdraw prematurely, a move that would throw the country into disarray, or to back the Sunnis.

"If fails to implement this plan, it will continue to have only limited leverage over the parties, each of which sees compromise as risky. The groups fear that if their rivals gain control of the government, they will face oppression, impoverishment, or mass violence. Compromising means ceding some power to rivals, and a miscalculation that cedes too much power could result in the enemy's seizing the rest later, with catastrophic results . . .

should threaten to use its influence to alter the balance of power depending on the parties' behavior. By doing so, it could make stubbornness look worse than cooperation and compel all sides to compromise."

The war of words between U.S. forces and the Mahdi Army is heating up as Al-Sadr's six-month exile comes to an end.

American commanders complain that there has been an upsurge in roadside bombings by Iranian-backed Special Groups terror cells linked to the Mahdi Army and are growing increasingly impatient at being hamstrung by a de facto ceasefire put in place for the duration of Al-Sadr's disappearing act. For their part, the Mahdi Army also seems to be itching to get back into the game.

"While the common narrative is that the ending of the cease-fire would have negative implications for the newfound security gain in since the surge began in January 2007, Sadr and his Mahdi Army will pay a price for reinitiating hostilities. Sadr will essentially be admitting both his and his Mahdi Army's role in the violence in 2006 and most of 2007 to the Iraqi people. He will also be laying his cards on the table, forcing his followers to choose between the Iraqi government and the Mahdi Army."

Roggio also notes that Al-Sadr will be returning to a rather different Baghdad and Mahdi Army. He says that the cleric doesn't have the clout with the Al-Maliki government as he once had and his army has been fractured by infighting with some elements tiring of the brinksmanship game.But like I said, all it will take is one match . . .

THE BLAME GAME
A consequence of the Sunni consolidation noted above is the inevitable emergence of warlords who have made it even more difficult for U.S. troops to build on security gains.

This has enabled Al Qaeda, as enfeebled as it may have become as a result of those military gains from the Surge, to find weak links in what passes for the security structure in Baghdad and other cities. This, in turn, may have led to the horrific twin suicide bombings unwittingly carried out by two mentally disabled women that left about 100 people dead in two capital markets earlier this month.

In an interview with Christian Science Monitor correspondent Sam Dagher, Sunni warlord Khalid Jamal al-Qaisi asserts that his milita could have prevented the bombings, which he said bolstered his conviction that Iraqi security forces are infiltrated by militias and insurgents and riddled with sectarian biases.

Al-Qaisi says that he and his men do not recognize the authority of Al-Maliki and won't join the security forces under such conditions.

Says Joost Hilterman, an analyst with the International Crisis Group:

"It's very dangerous, what's happening . . .If this is not handled right, it could really backfire. These groups are truly antagonistic. If the Americans pull out, they will start fighting each other unless there is political accommodation and power-sharing arrangements at the top."

THE NAME GAME
If the military hasn't put a name on something, then it simply doesn't exist.

In military parlance, the Sunni insurgents like Al-Qaisi who were bribbed to come over to the U.S. side were called Concerned Local Citizens, but that apparently didn't translate well into Arabic, so their new moniker is Sons of Iraqi. (Sorry about that gals, but you know you don't count.)

"When you mention armed groups of civilians manning checkpoints and doing the work that the Iraqi Police and Army either will not or can not do, be sure to call them the Sons of Iraq."

Photograph byAnja Niedringhaus/The Associated Press
Posted by Shaun Mullen at 5:29 AM
Email ThisBlogThis!Share to TwitterShare to FacebookShare to Pinterest

While being compared to Shamaniac is pleasant enough, it was actually me doing to the dredging on the Biddle article over at Newshoggers.