Obama I: Why Clinton's Goose Is Cooked & How She'll Try to Climb Out of the Oven 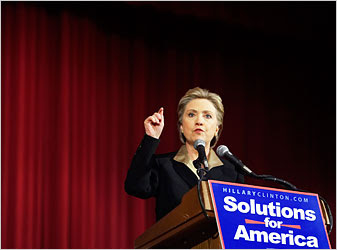 I've been killing a goodly number of brain cells lately trying to figure out how Hillary Clinton can keep from driving off the electoral cliff, but I keep shooting blanks.
For one thing, the mathematical deck is now stacked against her. She needs to win the Texas and Ohio primaries on March 4 by huge margins, but that looks increasingly unlikely, while a big win in Pennsylvania on April 22, where she doesn't even have a full delegate slate, would be too little too late.

With voting over in all but 14 states, Barack Obama leads Clinton 1,336-1,251 in delegates, according to The Associated Press's count, with 2,025 needed to secure the nomination.

Perhaps the biggest reason that Clinton's goose is cooked is the enormous fluidity of the Democratic electorate this year -- with an ample helping of Independents and Republicans who have been able to vote in open primaries.

In other words, Hillary, it takes a village.

Except for mimicking the Bush administration ("If you don't like the rules, change 'em"), the Clinton campaign seems to be caught in a state of suspended animation, and with every succeeding primary Obama draws in more voters from her core constituencies -- women and working-class voters.

And yes. White men can jump, Hillary. From you and John Edwards to Obama.

This is vividly illustrated below in a comparison of a demographic breakdown of who voted for Obama based on exit polls in 16 states on Super Tuesday (first number) 16 days ago and then in Wisconsin (second number) on Tuesday:

Rick Moran, crunching the numbers at Pajamas Media, notes that the most important Wisconsin exit poll result may be that voters soundly rejected by a 2-1 margin Clinton's "experience" argument and embraced Obama's mantra of "change." Obama also continued to score better on the three most important issues Democrats say are facing the country -- the economy, Iraq, and health care.

"It appears at this point that Clinton has virtually nothing to say nor can she demonstrate any quality that could start bringing some of these core constituencies home. . . . [W]atch over the next two weeks as Obama begins to catch and then surpass Hillary Clinton in Ohio and Texas. A double loss in those states would almost certainly bring loud and persistent calls from leading Democrats for her to exit the race."

So what's a cooked goose to do?

Certainly not concede, as Obama's campaign manager suggested in an atypically silly remark. What Clinton is left with is stealing and attacking.

Stealing as in trying to manipulate the superdelegate count and get delegates seated that are pledged to her from Florida and Michigan. Because of the longtime connections that she and Bill Clinton have to the party establishment, she would seem to have the inside track on this.

But, says The Economist:

The risk for Mrs Clinton is that she gets stuck with a reputation for being willing to do anything to get the nomination, even if that were to mean stealing away Mr Obama's electoral victory. With the fight against Mr. McCain looming, she runs the risk of looking both aggressive and desperate, hardly the person the Democrats would want taking on the Republicans’ genial and confident war hero. "

"The Clintons will attack Obama in harsh, personal terms for two main reasons: they hope to attract attention from the media, which they need to overcome Obama's advantages in paid ads, free media coverage . . . and field organization, and they want to instill doubts about Obama in the voters in Ohio and Texas.

"The attention-seeking will work. The free media, especially the cable shows, will report the Clintons' charges. The allegations may be straight from the Rove playbook -- illogical, self-contradictory, twisted, trivial. But whatever they are, they will be reported. . . .

"In a sense, it is the news that Mrs. Clinton and her sharp-tongued surrogates want to make and so they deserve the coverage.

"But will the attention inure to her benefit? Will it actually stop voters from moving to Obama, the way they have done now in vote after vote, across all demographics, in a clear sign that overall he is a much more popular candidate?"

Hundt concludes that the attacks will fail because Clinton will have to walk a fine line, is much better at nasty than nuance and has no detectable sense of humor, which comes in handy when trying to camouflage the delivery of a poison pill. Besides which:

"Successful attacks in politics usually depend on policy differences that can be used to explain a choice that voters can make. But the policy differences between Clinton and Obama for the most part favor Obama -- Mrs. Clinton spent too much time hammering out her position in the middle of the political spectrum to be able now to get to Obama's left."

The issue will be how Obama responds. Here Hundt and I are of a like mind:

Obama must respond, of course, but leaven that response with humility. And most importantly, he must stay on the offensive. These are all things that he has done well in his long, improbable climb toward the mountaintop.

He won't stop doing them now and Hillary knows it.

Photograph by Jacob Silberberg for The New York Times
Posted by Shaun Mullen at 5:29 AM
Email ThisBlogThis!Share to TwitterShare to FacebookShare to Pinterest