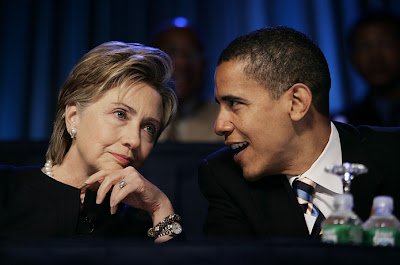 Today's Republican Party (as opposed to the Big Tent GOP of the Goldwater-Rockefeller era) has welcomed blacks with open arms -- as long as they use the back door on their way to the kitchen or maid's quarters -- and has been only somewhat less unfriendly to women.

So the possibility that John McCain will be facing an African-American or a woman in the November election is scaring the bejeebers out of party bigs, who have launched a secret operation to try to determine how far they can go in attacking either Barack Obama or Hillary Clinton.

Before I go any further, please note that this is not a satire like my Saga of the Cedars. And pause to consider the extraordinary fact that one of the two major political parties in America has become so extreme that it has to take steps to try to immunize itself against what it sees as inevitable charges of racism or sexism.

And marvel that the secret operation is not meant to sensitize the party faithful, let alone draw in black and woman voters, but to gauge how to best attack Obama or Clinton.

Jack Kemp, the 1996 Republican vice presidential nominee, is one of the few prominent Republicans to speak out about the GOP's raving intolerance.

Kemp tells The Politico that:

"Being an African American at the top of the ticket, if he makes it, is such a great statement about the country. Obviously you have to be sensitive to issues that affect urban . . . . You have to be careful."

More here. And here for a sneak peek at what the Republican attacks might be like if it's Obama.

For news cycles can be a friend,
Particularly as and when they end.

You know those trey stupid socialistic European countries that provide safety nets for their citizens?
They're kicking our butts.