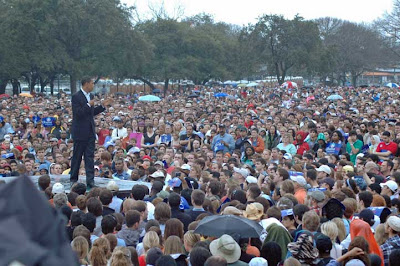 CULT LEADER AND BRAINWASHED FLOCK?
Change is the lodestar of this presidential campaign season.

The notion of change is, of course, an integral part of the campaign of practically every non-incumbent candidate, but the degree to which it suffuses the 2008 contest is extraordinary.

For starters, the Democratic nominee will be either a woman or an African-American for the first time, and there is a very good chance that one of them will be the next president.

As the result of a presidential regime whose signal accomplishment has been to alienate the public, long-term economic trends that further threaten the viability of the middle class and a feeling that today's challenges are beyond the grasp of institutions that are supposed to help see us through hard times, voters thirst for change even if they are unsure about what that should be.

Barack Obama, of course, has turned what seemed to be an improbable quest into the big story of the primaries because of the power of his own message of change.

But not commented on is what this message means to insiders – the media bigshots, consultants and other camp followers – who are confronted with the prospect of having to deal with, as well as possibly accommodate, Obama's army of bright-eyed idealists for whom politics is a passion and not a paycheck.

These are the insiders whom Atrios derisively calls the Villagers. They are the permanent, self aggrandizing inside the beltway clique for whom change, except for the abstraction of a stump speech or television commercial, and the quadrennial shuffle of used-up candidates in and out, is anathema because this clique grows more incestuous by the campaign cycle and views the voting public as a bunch of rubes to be diddled.

The Hillary Clinton and John McCain organizations are joined at the hip with this clique, while Obama can be viewed as a threat to its monopoly on how the game is played and how the players are rewarded.

* * * * *
Having tired of JFK comparisons (of which I too am guilty) and having been unable to pin anything particularly egregious on Obama other than his having experimented with drugs as a teenager and been in the same room a few times with a notorious slumlord, look for the mainstream media to begin pulling out the stops over the excitement he generates.

Joel Stein of the Los Angeles Times is merely embarrassed by Obama supporters, while ABC News chief national correspondent Jake Tapper observes that when he sees the excitement generated by Obama he can think of only one thing -- a cult.

A little over the top, wouldn't you say?

Tapper later appended his post to say he's all for enthusiasm in politics but was merely touching on the fact that some Obama supporters' exuberance seems to be getting a little out of hand. (I wonder what he would have thought back in 1968 when legions of long-haired and bearded young men, including both of my roomates at the time, "Got Clean For Gene" so that they would be more respectable looking as Eugene McCarthy workers for his own campaign of change.)

Could Master Jake be a Villager who is feeling threatened?

* * * * *
From arriving at the polls to waiting in line to going into the booth and pulling levers or pressing buttons, voting has always been a deeply personal experience for me, and the more people who feel similarly the better off we are.

This is why a change that on its face seems good may not be.

is in the vanguard of states permitting early voting by mail. In fact, about half of all votes cast in the Super Tuesday primary had been signed, sealed and delivered before Election Day.

It's a good thing that people who want to vote aren't locked into having to juggle their schedules to go to a polling place on a certain day and at a certain time or go through the red tape that once made absentee voting so difficult.

But filling out a mail-in ballot while sitting at a kitchen table or behind the wheel in a McDonald's drive-through lane cheapens perhaps the most important civic duty, and that's not the half of it.

How many of those early California voters would have voted differently if they hadn't had that option and instead of mailing in their ballots three or four weeks out had been exposed to the debates and speechifying in the days before Super Tuesday, including Obama's bat-out-of-hell charge from well behind Clinton to nearly break even with her?

I suspect that the outcome might have been different.

For a good Catholic girl with impecible conservative credentials, Peggy Noonan has been going through some changes of her own. Perhaps you could call it getting religion.

Noonan, a former Reagan speechwriter and present day Wall Street Journal columnist, first broke ranks with the neocons over the Iraq war and then with President Bush.

Writing about the problems that Clinton now finds herself saddled with, chief among them a reality the mainstream media cannot yet utter -- that Obama for the moment is eating her lunch -- Noonan wryly notes:

"The Democrats have it exactly wrong. Hillary is the easier candidate, Mr. Obama the tougher. Hillary brings negative; it's fair to hit her back with negative. Mr. Obama brings hope, and speaks of a better way. He's not Bambi, he's bulletproof.

"The biggest problem for the Republicans will be that no matter what they say that is not issue oriented--'He's too young, he's never run anything, he's not fully baked' --the mainstream media will tag them as dealing in racial overtones, or undertones. You can bet on this. Go to the bank on it.

"The Democrats continue not to recognize what they have in this guy. Believe me, Republican professionals know. They can tell."

Music has lost its power to change the world.

That message is courtesy of movie director Bernard Shakey, who is better known as Neil Young, the writer of so many politically charged songs.

In for a screening of his new movie, CSNY Deja Vu, Shakey-Young opined:

''I think that the time when music could change the world is past. I think it would be very naive to think that in this day and age.

''I think the world today is a different place, and that it's time for science and physics and spirituality to make a difference in this world and to try to save the planet."

Perhaps it is naive to think that music can help bring change. If so, then color me naive.

Young has been one of the few troubadors who never shrank from speaking their musical mind -- from racism in "Southern Man" in 1970 to the hypocrisy of the Iraq war in "Living in War" in 2006 -- so his catharsis is disheartening.
Posted by Shaun Mullen at 5:30 AM
Email ThisBlogThis!Share to TwitterShare to FacebookShare to Pinterest

Nanderthals for Change
Fay Buchanan, Romney spinmeister, arch Republican Villager and sister of Pat Buchanan was being interviewed. The reporter broached the topic of change, that Romney had joined the verbal band wagon of and for change.
"We're definitely for changing the old prevailing ways of Washington" said dear Fay.
But you're in the process of adding White House insider types, Bush confidants and Cheney genes to Romney's staff said the reporter.
"Isn't it amazing how the old guard can be a force for change?" responded Fay, effortlessly.

Hey, he's so much of a cult ... he should be introduced by Ed Sullivan.