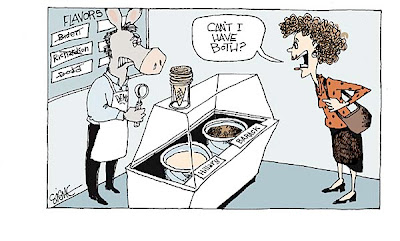 I'm confident that Hillary can still win the nomination. I believe she has what it takes to do what is necessary to win, and backed by her charismatic, self-deprecating Machiavellian husband I believe she has a very good chance of facing McCain in the general election. But if I were a Democrat, I'd be worried about what would happen if she lost the nomination. Think hell hath no fury? Wait until you see a Clinton scorned by the likes of Oprah and the Kennedys.

I could go on at great length about my problems with the Clintons and their gang over the years, but the real point is that Hillary Clinton isn't one person that we might choose to vote for over some other person. Hillary Clinton is at the center of a movement within the Democratic Party. She has studiously distanced herself from the DLC policy shop, but DLC people have all endorsed Clinton. People like Terry McAuliffe are still the face of her campaign. Mark Penn is her campaign manager. These are the people that are going to win if Hillary wins. While some people celebrate the novelty of having our first female president, the government and the party apparatuses will be staffed with DLC corporate hacks and wannabes.

How is Obama different? He's playing much of the same game from the other side. His positions are always calibrated to please the base without making the suits nervous. His policies don't mean anything either. But he has a much, much different crowd, different life experiences, different grudges, different allies, different scores to settle. And the bottom line is that his Gang is a gang I can live with. My opposition to Clinton has very little to do with Hillary Clinton by herself.

Having said that, I don't think we'll get real progressive governance unless we have a realigning election (like 1932 or 1964). I think that election is within reach with Barack Obama and that it will be muted or squandered with Hillary Clinton. So, for me, just Obama's nomination is potentially a huge boon for progressive politics. If nothing else, he'll have bigger majorities than Clinton would have. But it's more than that. I think Obama has some of the political gifts needed to do more with less. Anyway, I haven't expounded on all my reasons for detesting the DLC and the gang that surrounds the Clintons, but I've said enough, I hope.

With all the attention that's been paid to Obama's Red State appeal, I'm not sure I've seen it mentioned that his path to the Democratic nomination, should he end up winning it, will have curiously resembled the strategy that the GOP used to win the last two general elections.

Coulter, Limbaugh et all are covering their asses, minimizing their losses, and laying the groundwork for the next 5 years of their careers. They have astutely divined that McCain will be the nominee & are betting that he'll get clobbered in a landslide. When that happens, they can say "Don't blame me! I told you so!"

And keep in mind that it's pretty clear that a major recession is in the offing. The last thing they want is a Republican administration to follow Bush's. They're desperate for a Democratic administration upon whom they can serve the due-bills of W's profligacy.

These people are entertainers first, last, and always. They're in show business, not politics, and they make an awful lot of money and have an awful lot of influence. Bill Clinton's presidency made their careers. Given their built-in audience of insecure, undereducated chumps and haters, Hillary-bashing is so easy to do that Rush can do it with one hand tied behind his back, and the other hand popping oxycodones into his mouth at a House-like rate. They dread another in the White House the way Br'er Rabbit dreaded the briar patch.

If McCain is bad now, just wait until the general election when he goes even further to the left to appeal to independent voters. Will he change the name of the Straight Talk Express to the Gay Talk Express?

-- JON SWIFT
Obama supporter Kathleen Geier writes that she's "getting increasingly weirded out by some of Obama's supporters. . . . Describing various encounters with Obama supporters, she writes, "Excuse me, but this sounds more like a cult than a political campaign."

-- JAKE TAPPER
In Washington, James Webb increasingly feels like the consensus choice for vice-president. I hear his name about 5 times as often as anyone else's. And that's a shame. It's an unfortunate habit of politicos to identify talented politicians and then try and rip them from office they're currently excelling in and jam them in a spot they may not be ready for, or may not be able to shine from. In the Senate, Webb ensures Democrats have a (probably) safe seat in Virginia, an aggressive and credentialed voice on national security, and a lawmaker with the knowledge and interest to set the legislative agenda on military affairs (as he has with prominent legislation seeking to guarantee soldiers as much time home as they spent deployed). From the vice-presidency, by contrast, he'd have to constantly watch his mouth, couldn't aggressively push the conversation beyond the president's agenda, couldn't actually pass laws, and would, in any case, have to leave the Senate, depriving Democrats of his voice in future legislative throwdowns and, quite possibly, his seat.

This article in the LA Times on the impact of telco price deregulation in California is a good illustration of the complex nature of the economics of competition and deregulation, and why it's so friggin' important for regulators and the public to understand this stuff. In 2006, the California PUC decided that voice service faced sufficient competition to phase out price regulation. In theory, competition would lead to lower costs and increased services and would remove the invariably stultifying impacts of regulation.

The result has been an increase in the availability of services and an overall decrease in the cost of service, but not in the way that ordinary folks understand or that regulators professed to expect from deregulation. Most customers have, in fact, increased the amount they pay for telecommunications services overall. But because they buy larger bundles of services that profess to discount the price of each element in the bundle, the average cost per service is lower although the amount of money paid has gone up. That might seem a good value trade if it were driven strictly by consumer choice. But consumer choice is driven by the decision of telcos to increase the cost of stand alone services. So people not looking to bundle do so because it is “cheaper” while poor people who cannot afford the higher price for the bundle get a real price hike with no value added.