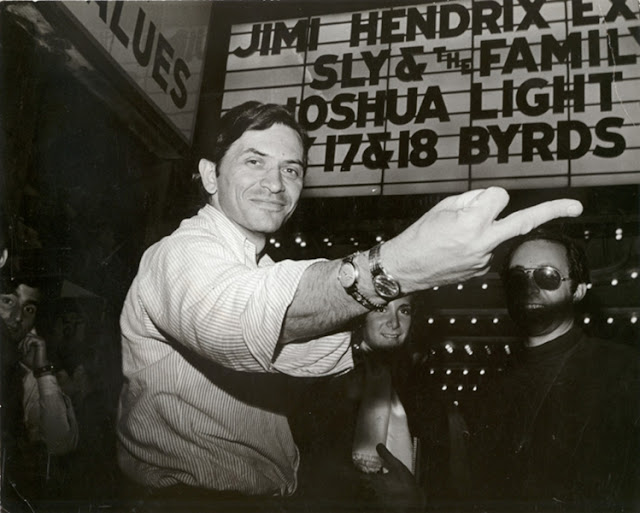 Concert impresario Bill Graham was known for three things: Foul language, picking up trash wherever he encountered it, whether backstage at his own venues or elsewhere, and a deep and abiding love of music -- if not necessarily musicians -- that he parlayed into what is without question the most extraordinary run of concerts in rock 'n' roll history.

To say that the charismatic Graham could be difficult is an understatement. He introduced himself to me by way of asking "What the fuck are you doing?" the first time I bumped into him back stage at a concert. He was, of course, picking up trash at the time.

It's not just that Graham caught the counterculture wave in at just the right time, he rode it hard, along the way helping introduce and in a few cases promote some of the seminal music acts from that era. They included the Jefferson Airplane, Janis Joplin and Big Brother, Santana, Country Joe and the Fish and his personal favorite, the Grateful Dead, with whom he had a love-hate relationship for years. (The Dead felt the same way.)

Bill Graham was born Wolfgang Grajonca in some 76 years ago today, the youngest son of a Jewish family.

When it became increasingly difficult for Jews to survive in Nazi Germany, Graham's widowed mother placed Graham and his younger sister in an orphanage in that then sent them to . He later was sent to the where he stayed in a foster home in the . His mother died in

Taunted as a youngster for being an immigrant and cruelly being called a Nazi because of his German- accented English, he changed his name to "Graham," which he picked from a phonebook because it was close to his real surname.

Graham was drafted into the Army in 1951, although he officially still wasn't a U.S. citizen, and served in the Korean War, where he was awarded the Bronze Star and Purple Heart for bravery. Upon his return to the , he worked as a waiter and maître d' in the resorts in upstate , a stint that he later said was good training for his eventual career as a promoter.

In a move that would change the course of rock promotion, Graham moved from to in the early 1960s to be closer to his sister, Rita. He attended a free concert in in 1965, where he made contact with the San Francisco Mime Troupe, immediately giving up a promising business career to manage the troupe and produce concerts.

During the 1950s and 1960s, had the largest bohemian community in the By the mid-1960s, that movement had metamorphosized into a hippie movement centered in the city's Haight-Asbury neighborhood. As this vibrant scene grew, public dance concerts became popular. These included the Acid Tests organized by Ken Kesey and his Merry Pranksters. Two promoters, Graham and Chet Helms, quickly moved to the forefront in promoting these concerts.

In November 1965, Graham joined with Helms's Family Dog Presents production company to organize a dance concert at a private residence to raise money for the Mime Troupe’s legal defense fund. Two more fundraisers were held at the Fillmore Auditorium in December 1965 and January 1966. In February 1966, the Jefferson Airplane headlined Graham's first non-benefit dance concert at the Fillmore Auditorium.

The February 1966 dance concerts and attendant use of drugs, notably psychedelics such as LSD, attracted the attention of police. Graham was denied a dance hall permit by the city for a subsequent dance concert in April 1966, but held it anyway. Police raided the event and arrested Graham and 14 concertgoers. A public outcry over the crackdown ensued and in an "only in San Francisco" solution, the city subsequently certified Graham and Helms as "dance-hall keepers." Helms (1941-2005), a former civil rights activist from turned entrepreneur, and Graham were in friendly competition until Family Dog Productions went bankrupt in December 1968, leaving the dance concert scene to Graham.

While Graham often had adversarial relationships with some of the musicians who played at his venues, usually because they had deviated from his meticulously planned schedules, he had an eye for up-and-coming acts like Santana and Eddie Money, both of whom he gave a huge boost. He never really has gotten adequate due for his uncanny ability to bring together musicians from different genres on the same bill – Miles Davis and the Grateful Dead being my favorite example. (Davis, a notoriously egocentric musician, later said that he was blown away by the Dead; the Dead felt similarly about the jazz legend.)

Behind Graham’s obscenity-laced manner and ability to strong arm rival promoters beat a heart of gold.
He kept ticket and concession prices low, would serve breakfast at the conclusion of New Year's Eve concerts and always had emergency medical personnel on site.

From the beginning, Helms and Graham commissioned artists to create posters for their dance concerts that were mounted on walls, telephone poles and lampposts throughout the area.

Although psychedelic is a term usually associated with drug use, it also describes art that seeks to reproduce the effects of psychedelic drugs. These posters are characterized by vibrating colors and patterns and bold lettering that often is nearly illegible. Some poster artists looked to Hieronymous Bosch and the Art Nouveau tradition for inspiration, while others developed their own distinctive styles. Among the best known artists in the Graham stable were Rick Griffin, Victor Moscoso, Stanley "Mouse" Miller and David Singer. 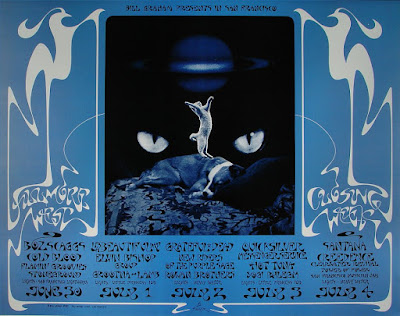 Two Fillmore West posters occupy places of honor at Kiko's House, including the Singer poster shown above celebrating closing week at the Fillmore West in July 1972. Original Fillmore posters, which have been widely counterfeited, are considered collectors items and a poster for a Jimi Hendrix show recently was appraised at $10,000 on PBS’s Antiques Road Show even though it had thumb tack holes in the corners

Citing the need "to find himself," Graham shuttered music venues and retreated to a Greek island in the early 1970s, but he couldn’t stand the peace and quiet and it bothered him that no one knew who he was.

He returned to the and dove into promoting major acts and tours, including the The Rolling Stones, and in 1985 promoted the American leg of the Live Aid concert at JFK Stadium in .
Graham had a lifelong dream of becoming a character actor and was able to scratch this itch on several occasions, including playing the role of a promoter in Francis Ford Coppola's Apocalypse Now (1979) and as Charles "Lucky" Luciano in Bugsy (1991).
Bill Graham was killed in a helicopter crash near on . He remains the gold standard by which rock promoters should be judged.

Photograph by Fred McDarrah (May 1968)
Posted by Shaun Mullen at 5:30 AM
Email ThisBlogThis!Share to TwitterShare to FacebookShare to Pinterest

Dan Rather, riding a donkey in the mountains of Afghanistan, could not have been any closer to the Real Action than you were.

I met Graham once, at the edge of the soundboard after a particularly hot Dead show in the Kaiser Auditorium sometime in the mid-1980's. The lights had just come on. I was drenched in sweat from dancing and stood there staring at the empty stage in awe, completely drained of energy. Graham, on the other side of the gate (inside the board area), walks up right next to me, opens a garbage pail and pulls out a glistening bottle of Heineken. When he cracked it open, I turned my head towards him and found him staring me in the eyes. I must have been a really sore sight. Without saying a word, he offered me the first sip and handed me the bottle. I took a healthy gulp, handed the bottle back and thanked him.

I had no idea who he was.

In the next instant, a friend came over and said: "Dude, I can't believe that Bill Graham just gave you a sip of his beer."

"I was really thirsty," I said.

don't forget to read, "Blues for Charles Sullivan: The Father of the Fillmore Auditorium" coming out in July of 2010. You will finally hear the untold story of how Graham got the Fillmore. He didn't name it, he sacrificed everything for it. Charles Sullivan was the master lease holder and gave Graham his bread, Mr. Sullivan was murdered in August of 1966, guess who was behind it? Read it you will never see Bill Graham the same way.