Campaign 2008: The Media Pushes the Stone Up the Hill One More Time 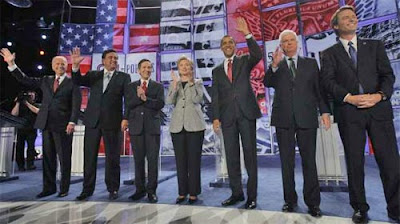 Mainstream news media coverage of the 2008 presidential campaign is turning out to once again be the same dreary affair that it is every four years: The candidates manipulate the media. The media obliges and manipulates back. There are recurring story lines that bear only coincidental resemblance to what's really going on. The focus is almost entirely on the horserace and rarely on the issues. And there is far too little introspection or self criticism.

There is one important difference this year -- the thousand of blogs, ranging from a handful of widely-read biggies to little blogs like Kiko's House, that will be all over the MSM's campaign coverage like one big cheap suit.

You can bet your computer hard drive that these blogs will put heat on the MSM stalwarts when they get caught out, as CNN did in its crass manipulation of the questions that the Democratic candidates were spoon fed at its Las Vegas "debate" last week and the MSM as a whole did post-debate in peddling the ridiculous story line that Hillary Clinton had "rebounded" without explaining why the frontrunner and increasingly prohibitive favorite to win the nomination had to rebound in the first place.

Blogs will not have made a big difference in how the MSM covers the campaign by the time Election Day rolls around. Sure, they may leverage some story or another to the point where the MSM is forced to pay attention. But they at least will be a reminder for voters that they are being diddled. And that in the end they make up their minds about who they should vote for and not allow Lou Dobbs, David Broder or some other co-opted insider do it for them.

* * * * *
I know of what I speak. Beginning in 1972 with the Nixon-McGovern race and mercifully ending in 2000 with the Bush-Gore debacle, I was involved in covering eight president campaigns and was in charge of coverage of two campaigns for a major metropolitan daily newspaper.

There were three discernable trends over this 28-year slog:

First, with every passing campaign I became less and less enthusiastic to the point that I viewed the 2000 campaign with dread before it got under way. Even then, little did I know how dreadful it would be.

Third, it became obvious with every passing campaign that the political system was addicted to its version of crack cocaine -- big money -- and that voters were being marginalized from the process with the willful assistance of the MSM.

It is not that the MSM doesn't try to free itself from these shackles. At least some media outlets make the effort.

In 1988, for example, my bosses and I were determined to cover the campaign differently. I was put in charge of coverage. I had a top-notch team of reporters and one of the best Washington columnists in the business. I had a fair amount of dough to keep reporters and the occasional photographer on the road in the service of covering aspects of the campaign that invariably get lost in the stampede, including the issues that Joe and Jane Sixpack wanted addressed.

But as primary season ended, the national conventions came and went and the fall campaign began in earnest, the predictable happened: Events, largely dictated by the campaign staffs and reinforced by the pack mentality of the MSM, kept forcing us onto the campaign buses of Bush and Quayle and Dukakis and Ferraro, which was exactly what we had vowed to avoid. By Election Day, our coverage was virtually indistinguishable from everyone else's.

The 1988 tilt was notably lackluster and Michael Dukakis was an extraordinary inept campaigner who would even make John Kerry look good. No matter. What began as an earnest effort to break the tired campaign coverage mold ended up with us making sausage like virtually everyone else.

* * * * *
Ounce for ounce, there was no more astute writer on the campaign trail in 1988 than the diminutive Joan Didion. There may be no better American prose stylist than Didion, whose essays, novels and articles are unfailingly insightful, invigorating and wittily ironic.

Didion wrote essays on the campaigns from 1988 to 2000 for The New York Review of Books that she gathered into Political Fictions, a wonderful little tome that is mandatory reading for anyone who should be disabused of the notion that the system works.

The overriding message of Political Fictions was obvious for even a lesser light like me: America's political class -- aided and abetted by the MSM -- has become increasingly intolerant of the nation that sustains it.

"The piece I finally did on the 1988 campaign, 'Insider Baseball,' was the first of a number of pieces I did about various aspects of American politics, most of which had to do, I came to realize, with the ways in which the political process did not reflect but increasingly proceeded from a series of fables about American experience. . . .

"At a point quite soon during the dozen-some years that followed . . . it came to my attention that there was to writing about politics a certain Sisyphean aspect. Broad patterns could be defined, specific inconsistencies documented, but no amount of definition or documentation seemed sufficient to stop the stone that was our apprehension of politics from hurtling back downhill. The romance of New Hampshire would again be with us. The crucible event in the candidate's 'character' would again be explored. Even that which seemed ineluctably clear would again vanish from our collective memory, sink traceless into a stream of collapsing news and comment cycles that became our national River Lethe. . . .

"Perhaps most striking of all, it was clear in 1988 that those inside the process had congealed into a permanent political class, the defining characteristic of which was its readiness to abandon those not inside the process. All of this was known. Yet by the time of the November 2000 presidential election and the onset of the thirty-six days that came to be known as 'Florida,' every aspect of what had been known in 1988 would again need to be rediscovered, the stone pushed up the hill one more time."

* * * * *
Prior to election reforms in the early 1970s, party hacks operating out of smoke-filled rooms pretty much determined who the presidential nominees would be. As the result of a media backlash and stories focusing on party politics in Iowa in the then omnipotent New York Times, attention turned to the Hawkeye State

a process of choosing delegates to the national political conventions through local caucuses. These have morphed into what has come to be known as "straw polls" for presidential candidates.

While The Times' power to influence national politics may have waned in the last 35 years, the MSM has become quite adept at manipulating campaign coverage. The Iowa caucuses are one of its stations of the cross.

As it is, the winners of the Iowa caucuses go on to win their party nominations only about half the time, which is not surprising since the winners often less reflect who might actually be presidential timber than who is willing to shovel the most snow-covered driveways and drink the most coffee at cozy crossroads diners.

That is exactly as the MSM wants it: An easy to cover and manipulate story line with 200,000 or so actors in flannel shirts with high cholesterol levels who are vested with disproportionate say about who the next occupant of the Oval Office will be. It almost makes one nostalgic for those smoke-filled rooms.

Am I being too tough on the mainstream media? No siree.

It should be noted that the MSM's quadrennial hash of campaign coverage is merely part of a larger problem that has been glaringly amplified by President Bush's ability to play the media like a cheap violin. The MSM's complicity in Bush's reign of error -- notably its concerted lack of interest in examining the rationales for a war that has cost nearly 4,000 American lives and perhaps a trillion dollars when such interest might have mattered -- is breathtaking.

Lest one think that the MSM has wised up, The New York Times -- which led the pack in giving Bush a free pass to go to war -- revealed yesterday that it had been sitting on a yet another major story for three years at the request of the White House.

This one concerns a super secret $100 million U.S. program to help the president's favorite dictator, Pakistani President Pervez Musharraf, secure his country's nuclear weapons. Does anybody know if the program has been even remotely successful given the administration's wretched track record on national, let alone international, security issues? Certainly not The Times.

Meanwhile, elsewhere in yesterday's Times, op-ed columnist Frank Rich noted that "Journalists, like generals, love to refight the last war," in this instance the intense coverage of Hillary Clinton's refusal to make public her personal papers from when the perhaps future first mister was president while paying scant attention to the many skeletons in the closet of the other frontrunner -- Rudy Giuliani.

"So the unavailability of millions of Hillary Clinton's papers has received all the coverage the Giuliani campaign has been spared. But while the release of those first lady records should indeed be accelerated, it's hard to imagine many more scandals will turn up after six volumes of 'Whitewater,' an impeachment trial and the avalanche of other investigative reportage on the Clintons then and now."

Indeed. The story here is the suitability of the frontrunners to lead America out of the Bush swamp, because I gotta tell you that for me this election is foremost a referendum on leadership.

I happen to be cool to Mrs. Clinton and am scared shitless by Giuliani. Both have character traits that remind me of the guy who is in charge right now. But if the news media is determined to relive those wild and wacky Clinton years, then it should be paying equal if not more attention to Giuliani's past as it pushes the stone up the hill all over again.

Photograph by The Associated Press
Posted by Shaun Mullen at 5:30 AM
Email ThisBlogThis!Share to TwitterShare to FacebookShare to Pinterest