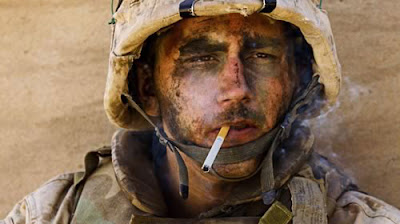 The young marine lighted a cigarette and let it dangle. White smoke wafted around his helmet. His face was smeared with war paint. Blood trickled from his right ear and the bridge of his nose.

Momentarily deafened by cannon blasts, he didn't know the shooting had stopped. He stared at the sunrise.

His expression caught my eye. To me, it said: terrified, exhausted and glad just to be alive. I recognized that look because that's how I felt too.

I raised my camera and snapped a few shots.

With the click of a shutter, Marine Lance Cpl. James Blake Miller, a country boy from Kentucky, became an emblem of the war in Iraq. The resulting image would change two lives -- his and mine.

If we had a competent, open-minded and subtle Administration, the questions of what to do about would still be dicey. As things stand, our clueless President, out-of-it Secretary of State and politically damaged diplomatic corps seem like rubes at the fair watching Musharraf run his games of repression and promises of free elections with no idea of where the nuclear pea is.

If terrorists attack the embassy in and injure or kill American diplomats serving there, the State Department does not have to investigate the incident as it would if it occurred anywhere else in the world, thanks to a tweak to federal law.

Two years ago, the State Department quietly requested -- and received -- a legal provision exempting the secretary of state from a requirement she order rigorous after-action investigations into incidents against embassies or personnel in Iraq and Afghanistan, according to the congressman who sponsored the bill. The reason, the lawmaker told ABC News at the time, was that Rice was reluctant to send investigators into harm's way.

The change in the law has gone largely unnoticed until now, when Rice is preparing to require diplomatic personnel to deploy to to make up a shortfall in State Department officials voluntarily serving there.

The data are clear: the richer you are in the Arab-Muslim world, the more likely you are to support terror. It's the religious ideology, stupid.

One of the more remarkable stories of the "surge" has been the alliance of native insurgencies with American and Iraqi forces to drive out foreign terrorists. Everyone understands this as a marriage of convenience. The insurgents made the mistake of allying themselves with the foreigners and discovered that the American infidels had much more respect for Iraq than the Islamist extremists did. After experiencing the brutality of al-Qaeda in Iraq, the native insurgents decided to cast their lot with the US and the elected Iraqi government, at least temporarily.
Nouri al-Maliki has broached an amnesty plan that may keep them in the fold permanently.

How did more than 190,000 weapons sent to Iraq for the Iraqi security forces disappear almost as soon as they were unloaded off the C-17s?


-- DAVID KURTZ
With an endless, futile and costly Iraq war, a stinking economy and most Americans seeing the country on the wrong track, the greatest national group delusion is that electing Democrats in 2008 is what the country needs. Keith Olbermann was praised when he called the Bush presidency a criminal conspiracy. That missed the larger truth. The whole two-party political system is a criminal conspiracy hiding behind illusion induced delusion.