The Big War Story the Media Is Ignoring 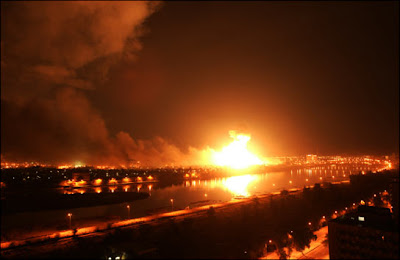 In the end, it was the MSM that was shocked, awed -- and duped
The mainstream media is full of stories these days about the decline and fall of the Bush administration and its catastrophic Iraq war policy, but you’re not likely to read the other big story: How the mainstream media abrogated its responsibilities in the wake of 9/11 and is deeply complicitous in the mess America finds itself in today.

As a reporter and editor who traveled the globe for three decades before retiring a few weeks before the terror attacks, I have a unique perspective on the MSM’s manifold failures, which I attribute to two things:

* The consolidation of the MSM into the hands of a few corporations more interested in good profits than good journalism. You know, we can’t really go after the Bush administration because that might drive away advertisers and otherwise hurt our bottom line.

These factors are so obvious that they should be beyond question, but there have only recently been a spate of articles that take the MSM to task. Among two of the more insightful articles -- neither, of course, in the MSM -- are:

Iraq: Why the Media Failed by Gary Kamiya at Salon that examines why there was a nearly complete failure to challenge the White House and Congress over the faulty assumptions that led the U.S. into the greatest foreign policy blunder in its history.

Journamalism Watch: Michael Gordon, Max Frankel, Fred Hiatt by Brad DeLong at his blog, Grasping Reality With Both Hands, that kneecaps those MSM stars, among other bright lights of the press corps, for driving drunk on the Bush Kool-Aid.

* * * * *
I was an early, if reluctant, supporter of the war. But it wasn’t long after President Bush stood on the deck of the aircraft carrier USS Abraham Lincoln and declared “Mission Accomplished” that the ink that still flowed through my veins connected with the few cells I had left in my brain. I realized that what I was reading in The New York Times and seeing on CNN just wasn’t adding up, notably the Bush administration’s rationales for the war and rosy predictions that the troops would be home by Christmas.

For one thing, none of those dread WMD had been found. Nor was there any trace of a nuculur . . . er, nuclear weapons program. For another, it was obvious that disbanding the Iraqi army was an enormous mistake, the failure to bring down Saddam’s Feyadeen would come back to haunt the occupiers as the insurgency took root, there were far too few occupiers for a Texas-sized country of 26 million people, and the notion that the troops would soon begin returning stateside was sheer folly given the history of a people and region where sectarian animosities and a well-practiced loathing of foreign intervention were never far from the surface.

This disconnect between what the MSM was saying and what I felt in my gut and knew in my head – the upbeat coverage and the administration’s rosy pronouncements versus the far less positive anecdotal reports from the field and insightful blogging by realists like Juan Cole -- grew wider as the first year anniversary of the war passed. And then the second and third anniversaries even as books arrived on the scene that told a very different story about the run-up to the war and its early days than that being peddled by the MSM.

Worst of all, there continued to be no consensus in the MSM about why there had been a war in the first place. And there were very few reporters beyond Knight Ridder’s dogged duo of Jonathan Landay and Walter Stroebel who stepped back far enough to see that the media and public had been sold a bloody bill of goods.

The most infamous retailer in this regard was Judith Miller, a Pulitzer Prize-winner reporter for The New York Times who broke a slew of cardinal rules of journalism, including becoming too close to her sources and ultimately being co-opted by them, inserting herself into the middle of her stories and running roughshod over her editors in repeatedly asserting that there were WMD. The Times may still be the greatest newspaper on earth, but for me its reputation will forever be tarnished and its credibility forever suspect because of the Miller scandal, which it made much worse because of its own institutional failures.

"Of course, the media was not alone in its collapse. Congress rolled over and gave Bush authorization to go to war. And the majority of the American people, traumatized by 9/11, followed their delusional president down the primrose path. Had the media done its job, Bush's war of choice might still have taken place. But we'll never know.

"Why did the media fail so disastrously in its response to the biggest issue of a generation? To answer this, we need to look at three broad, interrelated areas, which I have called psychological, institutional and ideological. The media had serious preexisting weaknesses on all three fronts, and when a devastating terrorist attack and a radical, reckless and duplicitous administration came together, the result was a perfect storm.

"The psychological category is the most amorphous of the three and the most inexactly named -- it could just as easily be termed sociological. By it, I mean the subtle, internalized, often unconscious way that the media conforms and defers to certain sacrosanct values and ideals. Journalists like to think of themselves as autonomous agents who pursue truth without fear or favor. In fact, the media, especially the mass media, adheres to a whole set of sometimes explicit, sometimes implicit codes that govern what it feels it can say. Network television provides the clearest example. From decency codes to subject matter, the networks have always been surrounded by a vast, mostly invisible web of constraints.

"Seen in this light, the mass media is a quasi-official institution, an info-nanny, that is held responsible for maintaining a kind of national consensus. Just as our legal system is largely based on what a ‘reasonable’ person would think, so our mass media is charged with presenting not just an accurate view of the world but also an 'appropriate' one."

Kamiya’s analysis is notable for its breadth and depth, but he still lets the MSM off too easy.

Brad DeLong’s focus is more narrow, and in writing about the press corps he takes no prisoners regarding the MSM’s painfully slow realization that the Bush administration had been standing in the deep end of the pool for so long that nobody in the press corps realized it couldn’t swim:

"This was the reality of the George W. Bush administration from the summer of 2001 onward. Yet if you relied on either Fred Hiatt's Washington Post or Max Frankel's New York Times, you would have had a very hard time learning about this reality until the last year or so. Today it is an accepted fact that the kindest thing you can say about the George W. Bush administration is that it is completely incompetent--that is even the party line in the hardest of right-wing Bush-supporting publications, National Review, and by the hardest of right-wing commentators, Robert Novak.

"Why wouldn't the American press corps in cover the Bush administration properly for its first five years? I really do not know. I do know that the world cannot afford to rely on 's press corps again: fool me once, shame on you; fool me twice, shame on me. American journalism has fallen down, and is unlikely to be able to get up until it can look honestly enough at itself to figure out what has gone wrong."

As the day wore on, the purpose of the visit became clear:

The White House wasn’t getting the kind of coverage it wanted from the press corps and was appealing directly to editors like myself to help sell its story.

It is difficult to conceive of the Bush administration feeling the need to roll out the red carpet for my counterparts today. What a difference two decades, a terror attack, a botched war and a cowed media make.

Posted by Shaun Mullen at 2:41 AM
Email ThisBlogThis!Share to TwitterShare to FacebookShare to Pinterest

What is really funny is that Bush is asking the Democrats to give up on the additional spending they want, when that is actually what he gave them to during the initial Iraq war authorization back in 2002. He has trained them to expect pork when he wants money for the war and the one time they actually want him to be responsible for a time table he changes the subject and does not want to be held responsible.