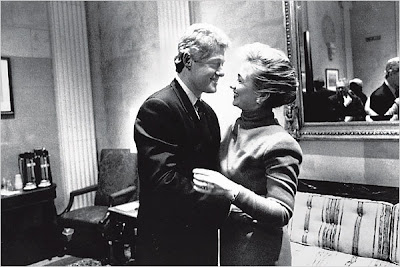 He is a virtuosic performer with reckless appetites. She is a plodding but savvy political practitioner. Her cool self-possession and occasional dogmatism stand in sharp contrast to his love of speechmaking, his "compulsive need to seduce" and his ideological elasticity. Both are cynical idealists, having been conditioned by decades of combat, going back to Bill’s first campaign, an unsuccessful House race in 1974, to see enemies and vast conspiracies behind every setback. They are genuinely fond of each other, even if he occasionally strays and she occasionally shouts profanity-laced tirades (although, as Myers tells the author, "she always crawled back to him"). And in a profession generally known for prevarication, the Clintons are notable in their readiness to bend the truth to fit political and personal necessity.

"She hasn’t accomplished anything on her own since getting admitted to Yale Law," wrote Joan Di Cola, a Boston lawyer, in a letter to The Wall Street Journal this week, adding: "She isn’t Dianne Feinstein, who spent years as mayor of San Francisco before becoming a senator, or Nancy Pelosi, who became Madam Speaker on the strength of her political abilities. All Hillary is, is Mrs. Clinton. She became a partner at the Rose Law Firm because of that, senator of because of that, and (heaven help us) she could become president because of that."

Rudy Giuliani has nothing to hide about his business dealings. Or, rather, he wants everyone to know that if the press finds what he's hiding, everyone will agree that everything's been "totally legal, totally ethical."

Abu Nawall, a captured al-Qaeda in leader, said he didn’t join the Sunni insurgent group here to kill Americans or to form a Muslim caliphate. He signed up for the cash.

"I was out of work and needed the money," said Abu Nawall, the nom de guerre of an unemployed metal worker who was paid as much as $1,300 a month as an insurgent. He spoke in a phone interview from an Iraqi military base where he is being detained. "How else could I support my family?"

Anyone have any idea why both the third world countries I just visited offered excellent airport baggage service, while JFK took over an hour to offload my bag?

It says something about our society that even after all of this time the Internet can still give so many folks the screaming heebie jeebies. You cannot swing a nice four-letter expletive around without hitting a main stream media lament about the state of American discourse. The culprits, we are told, are various bloggers of the left and right, anonymous commentors with dubious language skills, and assorted other evil doers who add to the near certain ruination of our fine republic. For the most part, bloggers react to such criticism by stomping their feet and shouting, "You don’t understand me! You’ve never loved me and you never will! I hate you!" If there was an internet equivalent of running up to their room and slamming the door, I’m sure they would add that as well.