Update on The City of Brotherly Mayhem 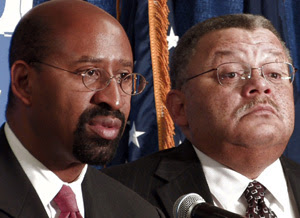 NUTTER AND RAMSEY
The last time we checked in with goings on in bloody Philadelphia, a police officer had been shot in the head outside a previously robbed Dunkin' Donuts by a perp who then stole his service revolver, a police officer and three other people had been wounded by an ex-con who drowned trying to escape his dragnet, and there was a lockdown at one of the city's largest high schools.

The first cop died and on cue and Police Commissioner Sylvester Johnson, as usual, blamed the continuing carnage on lax state gun laws.

Those laws -- dictated by a gun-happy state Legislature -- are indeed a factor, but only one of many, and these officials yet again showed no sign of being able to come to grips with the City of Brotherly Mayhem'’s demons, which are substantially of its own doing.

Since then there have been two developments of note:

* Rubbing salt in Philadelphia's wounds, New York City police say the Big Apple appears to be on track to have fewer than 500 murders in 2007, the lowest annual rate in four decades and a far cry from 1990 when 2,262 homicides were recorded in what was then called the Murder Capital of America.

* Michael Nutter, who vowed to fire Johnson if he was elected mayor, won in a landslide and promptly announced the appointment of Charles Ramsey, the police chief.

Ramsey, it seems, is the un-Johnson. He has a reputation as a tough guy who declared four crime "emergencies" during his tenure and has been the bane of civil libertarians. In fact, the capital city has had to pay out several million bucks to settle lawsuits filed against the department.

During Ramsey’s nearly nine years in , homicides fell from about 300 a year to about 170, and that's all that matters to many Philadelphians.

A centerpiece of Nutter’s mayoral campaign is a "stop and frisk" law enforcement plan under which police can stop anyone they believe to be suspicious. The procedure was upheld by the Supreme Court in a 1968 case, Terry v. , but outgoing Police Commissioner Johnson had stopped short of ordering its use because of the historic enmity between s black community and a police department that has been entangled in many brutality scandals involving black victims over the years.

Ramsey is a proponent of "stop and frisk," and under him D.C, police instituted a series of traffic checkpoints at which information about motorists who were breaking no law were entered into a database. The move was blasted as an invasion of privacy not by a civil libertarian, but by an official of the police union, and the practice was stopped.

The question of the hour, of course, is whether the good burghers of can be protected from murderous thugs and have their civil liberties protected at the same time.

Leading Philly blogger Will Bunch has his doubts, writing:

"Look, I'm aware the city is an emotional tinderbox, and from what I've heard and read recently, some Philadelphians would be happy to chuck civil liberties out the window as a way to clean up the streets and avenge the cop shootings (even though most crime experts note it's actually possible to reduce crime and respect liberty at the same time.)

Well, put it this way: If you are a civil-liberties-chucker, then Charles Ramsey is your man."

Will and I usually are on the same page, but I’m willing to give Nutter and Ramsey more than a half a chance to pull off this balancing act

Then there is that most famous Philadelphian of all. No, not Rocky Balboa. I'm talking about Benjamin Franklin, who wrote:

"They that can give up essential liberty to obtain a little temporary safety deserve neither liberty nor safety."