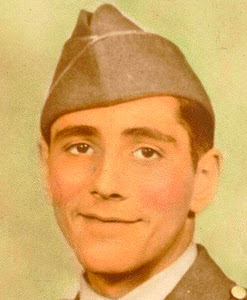 As a member of the 23rd Infantry Regiment of the 2nd Infantry Division, Paul R. Zimmaro landed with Company C on bloody on D-Day and fought his way through hedgerow country to liberate the key port city of .

The Indianhead Division, as the 2nd was called, continued to fight its way across until the Germans launched a major offensive in the , which became known as the of the Bulge, in the winter of 1944.

His right leg was amputated at in and he began three years of painful treatment for other serious wounds. It was while being treated at outside of that he met Anna Drabinsky of , who worked in the hospital’s administrative office. They married in 1948

Zimmaro, like so many disabled veterans, never let his handicap get in the way and would joke with curious kids at the that a shark had bitten him.

He became the first Walter Reed amputee to use a modified car with hand controls and a left-side gas pedal and later worked as a computer-supply technician for the Naval Supply Depot in .