Will Americans Get the Message? 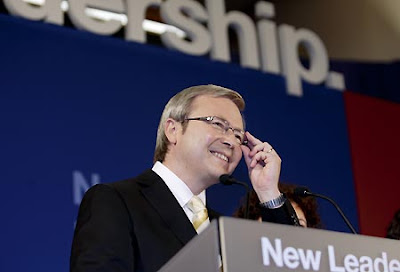 The winning candidate campaigned on a platform of new leadership to address voters' concerns about the environment, health and education. As one of his first acts as national leader he will push for the ratification of the agreement on reducing greenhouse gas emissions and negotiate the withdrawal of troops from .

Nah. It’s Kevin Rudd, leader of Australia's Labor Party, who crushed Prime Minister John Howard in voting today. Howard's Liberal Party-led coalition not only lost its majority in Parliament but he may suffer the indignity of losing his own seat to a former television news anchorman and rookie politician.

Howard, President Bush's staunchest ally in the Iraq War, steps down after 11 years in power. Ironically, he gets high marks for his stewardship of Australia's long booming economy, but his countrymen have come to take that for granted and felt that it was time for change at the top.

Glenn Greenwald correctly points out that Americans typically view elections in other countries based on the self-centered perspective that the result is a referendum on the U.S.

"The humiliating defeat of Howard . . . was driven largely by [Australians'] own domestic concerns, and it had little (though not nothing) to do with the U.S. Still, it is worth celebrating Howard's defeat in light of how pernicious a presence he was, as one of the very few remaining world leaders who loyally supported the worst and most war-loving aspects of the Bush/Cheney foreign policy."

Howard's defeat follows that of José María Aznar of , who also backed the U.S.-led invasion of , and the political setbacks of Tony Blair of .

So the Aussies, Spaniards and Brits seem get the message. But is listening?

Posted by Shaun Mullen at 12:38 PM
Email ThisBlogThis!Share to TwitterShare to FacebookShare to Pinterest