It's Official: The Forever War Is Forever 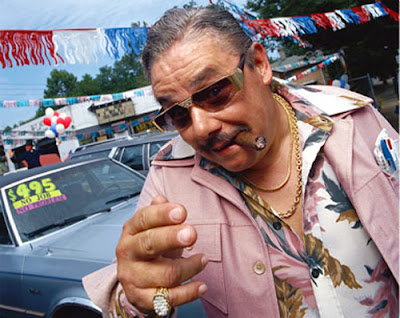 "BIG AL" MALIKI
And so in the end, a war that has taken the lives of nearly 4,000 Americans and perhaps hundreds of thousands of Iraqs, further destabilized the Middle East, provided one-stop shopping for fledgling terrorists and sullied the legacy of an American president ends not with a bang or a whimper – but with a business deal that will assure that George Bush's Forever War is just that.

That is the substance of reports the Baghdad government, seeking protection against the inevitable coup attempts and foreign threats once a drawdown of U.S. troops finally commences, has graciously offered the U.S. a deal that it can hardly refuse: Preferential treatment for American oil companies . . . er, investments in return for an indefinite troop presence.

In short, a Shiite-dominated nanny state.

Lieutenant General Douglas Lute, President Bush’s advisor on the war, calls the deal
"a set of principles from which to begin formal negotiations." In this case on a rust bucket with too many miles on the odometer and four bald tires, but with a limitless supply of gasoline to keep it on the road so long as it stays away from Basra, where things have gone from bad and are stuck on worse.

There's something in the deal for almost everyone:

* The U.N. can lift those niggling restrictions on Iraqi sovereignty in place since the invasion of in 1990 sooner rather than later, leaving to do pretty much damned well what they please. Which come to think of it, they've been doing all along anyhow.

The Al-Maliki government can drag its feet on political reconciliation indefinitely while getting long-term coup insurance in the form of 50,000 or so American nannies who will rush to the rescue of the inevitably hapless Iraqi security forces at the first hint of trouble. * The White House can do the deal without Senate approval, while continuing to give the finger to Iran from the mega-bases it has built and wouldn't have given up under any circumstances.
American oil companies will get protection from the nannies as they merrily tap one of the world’s largest oil reserves while continuing to charge usurious prices at the pump and reap shameful profits.
So what's in it for the American people? Uh . . . give me a sec and I'm sure I'll think of something.


Oh, you mean this was all about oil to begin with?

Posted by Shaun Mullen at 2:00 PM
Email ThisBlogThis!Share to TwitterShare to FacebookShare to Pinterest