The Enemy Has Changed But The Air Force Hasn't. It's Time To Clip Its Wings 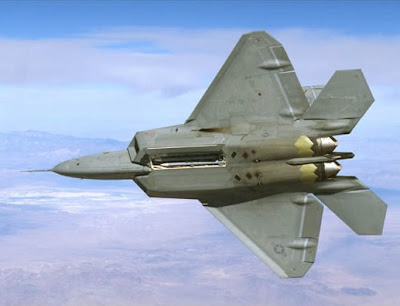 THE F-22 RAPTOR: A $362 MILLION BABY (APIECE, THAT IS)
You know that we live in unusual times when Congress has seen the light and is resisting replacing the s mainstay fighter jets with an incredibly expensive Cold War throwback and there are questions about whether the Air Force itself has outlived its usefulness.

The F-15 Eagle is the Air Force's current all-weather tactical fighter. It entered service in 1974 and is slated to remain in service until 2025. There are some 688 F-15s flying with Air Force and Air National Guard units.

The F-15 is a terrific aircraft but is getting long in the tooth. It has been further strained because of counterterrorism duty demands, and the entire fleet was grounded last week following a crash in that raised concerns about possible structural fatigue problems.

Filling in on routine combat operations in Iraq and Afghanistan until the F-15 is airborne again is the F-16 Fighting Falcon, another terrific aircraft and the Air Force's current multi-role fighter. There are 650 F-16s in Air Force service, although some 4,000 are flying worldwide in 23 other air forces, making it the most popular fighter jet. The Air Force's F-16s also are slated to be phased out in 2025.

Enter the F-22 Raptor, the heir apparent to the F-15 and F-16 and one bad ass-looking aircraft.

The F-22 uses stealth technology to carry out the Cold War mission for which it was designed -- attacking advanced enemy fighters. But that mission was redundant before it entered service in 2005 and it is coming on line an era when the enemy is low-tech insurgents.

F-22s are being produced at the rate of about 20 a year with about 100 currently in service. The Air Force originally planned to order 750, but congressional caps as a result of concerns over its suitability for modern-day missions and its cost have limited the number to 277, and the Pentagon now says it will buy a total of only 183. This has had the effect of raising the purchase price to a very dear $362 million per copy.

As Ed Morrissey notes at Captain’s Quarters, "Our entire military strategy relies on air supremacy -- and if the F-15 can't deliver that any more, then we have allowed that strategy to slide into obsolescence."

Ed is right up to a point, but behind the times.

While air supremacy remains important since and have air forces (oh, and , too), it has taken a back seat to counterinsurgency. The F-22 is not a leap forward but a throwback, and Pentagon claims that recent design modifications to this high-tech beheamouth now enable it to fly counterterrorism-support missions are unconvincing and unconfirmed.

This in turn begs the question of where – or even whether – the Air Force fits into a post-9/11 world in which strategic bombing is largely passé, incoming enemy fighters are far and few between, and supporting counterinsurgency missions is Job One.

Primarily because of the Army Air Forces' strategic bombing successes during World War II, the Army's air arm became a separate branch in 1947.

Today the Air Force has about 334,000 active-duty personnel, 6,000 manned aircraft and several thousand unmanned combat air vehicles, cruise missiles and intercontinental ballistic missiles. Its mindset -- like that of the Bush administration on September 10, 2001 -- is stuck in the past.

Although the Air Force is only 70 percent of the size it was after the First Gulf War, it remains bloated, although a major force reduction is underway that will trim about 40,000 people from its ranks.

Whether concomitant reductions should be made in its aircraft arsenal because of the shift in emphasis to counterinsurgency warfare is another matter.

The Air Force, anxious to justify both its presence and independence in the rapidly changing world of warfare, argues that air power can be an enormous help in almost any counterinsurgency mission. But that is questionable in light of a by-product of its air strikes in and substantial civilian deaths and outrage among the civilian populations that American and coalition forces are supposed to be winning over.

Robert Farley notes in a must-read American Prospect commentary that the Air Force has been successful in carrying out tactical missions but doesn't like them because they have to follow and not lead.

Farley says that the Air Force's antipathy for ground support has led it to repeatedly try to shed the A-10 Warthog, the most ungainly and one of the slowest aircraft in its inventory, but one that does its job as a close-in attack aircraft extremely well.

"The Army loves the A-10, but because the aircraft contributes neither to the air superiority mission that the Air Force favors nor to the strategic mission that provides its raison d'etre, the Air Force has always been lukewarm toward the aircraft," Farley writes. "Offers on the part of the Army to take over the A-10 have been rejected, however, as this would violate the Key West Agreement," which is the colloquial name given to a 1948 policy paper that delineated the functions of the armed forces.

It is a good question and one whose time has come.

Farley argues that the Army and Navy can get the Air Force's job done within their present structures:

* Tactical airpower should be ceded to the Army, the result being tighter collaboration between air and ground forces, with some tactical air power elements passing to the Marine Corps.

* Strategic airpower – conventional and nuclear -- should be ceded to the Navy with its aircraft carriers and submarine-launched cruise missiles.

Farley concedes – and I certainly agree – that the Air Force isn't going to disappear anytime soon because it has powerful friends in high places.

Nevertheless, he concludes, "The idea of an independent air force was not handed down on . We have institutions because we've built them. When these institutions outlive their usefulness or fail as experiments, we can take them apart. In a post–September 11 world, we live with threats quite different from those that the Soviet arsenal used to pose. We can and should devise uses and a bureaucratic structure for American airpower better suited to our current challenges than those set out in 1947."

Indeed. It is time to clip the Air Force's wings.

Bill Sweetman at Aviation Week has written a rejoinder to Farley's piece. He author argues that Farley has cherrypicked to make his point — and that it is a point that has been made before. I'm still with Farley.

One of the problems I see is that the political cross-section of the military is very narrow. There are too many turf wars and cozy relationships and not enough concern for the welfare of the country. The liberal segment of the American population has a certain level of contempt for the military and its "toys". If liberals were represented in the Armed Services in greater numbers, perhaps we could have more influence and more trust in what they have to tell us.

The need for military power is not going to disappear. Until we know which way Russia and China are going, we will need to retain some sort of "Cold War" fighting capability. There are too many things that the Air Force does that would be neglected by other services. Unfortunately, there are many things that the Air Force doesn't do as well as it should.

One of the great technical disappointments for me has been the failure of the Army to use small tactical drones. The Predators have apparently been successful, but the local reconnaissance drones have been suppressed, reputedly for air traffic control problems. This is the Air Force's doing. They are unwilling to relinquish control of the skies to the "rival" services. They need to monopolize the radar blips. I think Wretchard has linked to stuff on this issue.