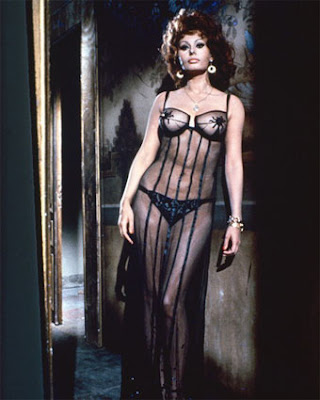 BUT IS SHE OVULATING?

Love songs may rhapsodise "something in the way she moves", but a sexy walk is not a sign that a woman is ready to become pregnant. In fact, a new study suggests that the way a woman walks changes during her monthly cycle, and that the most seductive wiggle occurs when she is least fertile. . . .

For the latest study, Dr [Meghan] Provost and her team dressed female volunteers in suits adorned with light markers, as used in special effects departments, along the joints and limbs.

This allowed them to film each woman as she walked and then analyse her gait. They also collected saliva samples to find out whether each woman was in the more or less fertile phase of her menstrual cycle.

The women who were ovulating walked with smaller hip movements and with their knees closer together, New Scientist magazine reported. When 40 men were shown the images of the women walking they rated those in the less fertile part of their cycle as having the sexiest walks. . . .

That makes evolutionary sense, because it would benefit a woman to advertise her fertility only to those men she believes would make a suitable mate. In contrast, men can pick up on the attractiveness of a woman’s walk from long distance, and it can therefore act as an unwitting signal to less appealing males whom she might not want to choose.

Looking back, I would have to say that the greatest scientific achievement of my lifetime is the discovery of the secret of the DNA and the consequent sequencing of the human genome. You will hear the latter compared to the building of the atomic bomb, or putting a man on the moon. It is more, much more.

It is an end and a beginning.

It is the end of the reign of the gods.

No one knows yet what is beginning.

I've been back and forth on the topic of Ben Stein for well over 20 years. I loved his writing from the time I was first exposed to it, and he used to be human-sized enough to correspond with me by email when he just wrote for the old American Spectator, but oddly enough when I would challenge him — gingerly — on religious issues (he is Jewish, as I am), he would stop (and eventually did) stop writing back. Okay, I get it. Celebrity, kind of.

His writing is certainly idiosyncratic, and I don’t agree with everything he says. But he says it very well, very sincerely and he’s mostly right, and very original.

But he just may win me back over with this — his crusade against the crusade against Intelligent Design. He even has a blog about it. I need to do some homework to figure out the relationship between Ben Stein and God, but evidently he’s, not surprisingly, kept an open mind about it . . . unlike some people.

Ask most Britons if they would rather live in and they'd probably answer "oui." But British judges have ruled that two English boys who hate living there don't have to.

The boys, 11 and 16, who have a French mother and a British father, were taken to live in after the parents' marriage broke down. But during a visit to they asserted their "Britishness" and refused to return to live with their mother.

The mother took the case to court, arguing that she had a right to decide where they should live and that the father had put the children up to it, the Times newspaper reported.

But three of 's most senior judges decided the boys had an inherent right to refuse to live in , where nearly 300,000 Britons have chosen to live.

Describing the case as "not just exceptional but very exceptional," the chief judge said it was clear the children really disliked the country and hadn't settled in.

They preferred because, apparently, they could "walk to school, could have their own key and would not have to do as much homework."

One of my favourite topics of conversation with happily attached women is to ask them about the first time they met their partner.

"Give me the story, set the scene," I'll say and tease out the juicy details.

It's always fascinating to hear how first impressions were mismatched with their man's real nature and how much looks, alcohol, Christmas parties or an exotic location played a part in their initial coupling.

After we've gotten the superficial details out of the way, I'll press further and ask them for their partner's deeper qualities and, very often, this will be one of the things a woman says:

You don't hear a lot of talk about men and kindness in the media, it's not something commentators rave about in football or fans applaud rock stars for; you'll never hear the Canberra press gallery waxing about a politician's capacity to be kind.

In many ways it's considered a weakness, a fault, a vulnerability that will lead to a person's downfall.