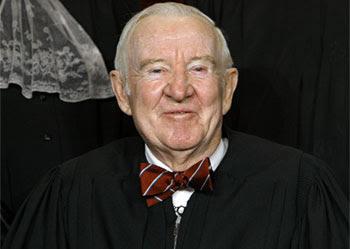 Justice John Paul Stevens, 87, last week became the second-oldest justice in the Supreme Court's history. Only Justice Oliver Wendell Holmes, who retired at 90 in 1932, served to an older age.

Although Stevens has given no hint of retiring and shows no sign of slowing down -- in the courtroom, he looks and sounds much as he did 20 years ago -- the question of his tenure looms over the court and the 2008 presidential campaign.

If there is a tipping point in the Supreme Court's future, it is likely to come with his departure. What kind of justice would replace him -- and how strong the court's slim conservative majority would be -- may well depend on who is elected president.

Stevens, a lifelong Republican, was appointed to the high court in 1975 by President Ford. He succeeded William O. Douglas, a New Deal-era liberal, and soon helped form a moderate-to-conservative coalition that restored the death penalty as an option for states.

In the last decade, however, he has emerged as the strongest voice for the court's shrinking liberal wing. Stevens supports the strict separation of church and state, a woman's right to choose abortion and strong protection for the environment. This year he wrote the opinion for the 5-4 majority that said the government may restrict greenhouse gases as a threat to the environment.

Rudy Giuliani and Mitt Romney have been pandering so relentlessly for conservative GOP primary voters, each insisting that he is the superior immigrant-basher, that at some point I wouldn't be surprised to hear one candidate top the other by declaring that all illegal aliens should be waterboarded.

Over on the Democratic side, meanwhile, they've got a woman, a black, a Hispanic, a preening metrosexual with an angled nape – and they all think exactly the same. They remind me of "The Johnny Mathis Christmas Album," which used to re-release every year in a different sleeve: same old songs, new cover. When your ideas are identical, there's not a lot to argue about except biography. Last week, asked about his experience in foreign relations, Barack Obama noted that his father was Kenyan, and he'd been at grade school in . "Probably the strongest experience I have in foreign relations," he said, "is the fact I spent four years overseas when I was a child in ." When it comes to foreign relations, he has more of them on his Christmas card list than Hillary or Haircut Boy.

Rudy: I voted for McGovern but I actually preferred Nixon.

As the Democratic presidential candidates debate whether Americans should be forced to obtain health insurance, the people of are living the dilemma in real time.

A year after became the only state to require that individuals have health coverage, residents face deadlines to sign up or lose their personal tax exemption, worth $219 on next year’s state income tax returns. More than 200,000 previously uninsured residents have enrolled, but state officials estimate that at least that number, and perhaps twice as many, have not.

Federal officials are routinely asking courts to order cellphone companies to furnish real-time tracking data so they can pinpoint the whereabouts of drug traffickers, fugitives and other criminal suspects, according to judges and industry lawyers.

In some cases, judges have granted the requests without requiring the government to demonstrate that there is probable cause to believe that a crime is taking place or that the inquiry will yield evidence of a crime. Privacy advocates fear such a practice may expose average Americans to a new level of government scrutiny of their daily lives.

We don't trust the . We could suspend nuclear enrichment. We did it before for two and half years. But it wasn't enough then, and wouldn't be enough now. We will not suspend enrichment again because there is no end to what the will demand.

The prosecutors' office has dismissed a suit against Donald Rumsfeld accusing the former defense secretary of torture.

The prosecutors' office [ruled] that Rumsfeld benefited from a "customary" immunity from prosecution granted to heads of state and government and foreign ministers, even after they left office.