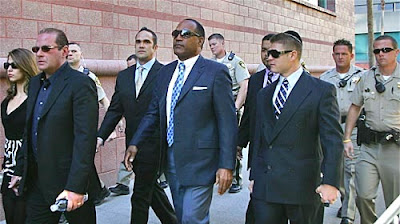 Perhaps no one knows when O.J. Simpson hit bottom -- probably not even The Juice himself -- but it probably occurred sometime in the run-up to the 1994 murders of his former wife and her friend during a cocaine-fueled binge or a fit of jealousy.

In any event, it is sadly obvious that the former football star, advertising pitchman and not-bad Hollywood actor, whose good looks have faded at age 60, has been crawling along the bottom since then. As extraordinary as it seems, he now faces serving life in prison for the second time in 13 years.

Despite overwhelming evidence that Simpson murdered Nicole Brown Simpson and Ron Goldman, a jury rejected the inept prosecution's case and bought into his artful lies and the masterful defense that his lawyers put on, so he avoided what probably would have been a life sentence.

He wasn't so lucky at a civil trial two years later in which a jury awarded the Brown and Goldman families $33 million in compensatory and punitive damages after a proceeding that to Simpson always seemed like a big joke.

Simpson bottom crawled to Florida after the murder trial where liberal bankruptcy laws have shielded him from many of his creditors, and aside from an occasional dust-up on a golf course or in a nightclub, as well as his off again, on again "fictional" account of the murders, he has been mercifully out of the news if not out of trouble.

Simpson's bottom crawling recently took him to Las Vegas where he allegedly masterminded an armed confrontation with two sports memorabilia dealers trying to sell items that the former star claims are his. He has pleaded not guilty to a passel of charges, including kidnapping and armed robbery.

This time his lies were not so artful, and after a three-day preliminary hearing, Justice of the Peace Joe M. Bonaventure ruled this evening that Simpson and two co-defendants -- Clarence "C.J." Stewart and Charles "Charlie" Ehrlich -- will be bound over for trial.

If convicted after a trial that probably won't begin until late next year, Simpson could face life in prison.

In the most damaging testimony, Simpson's repeated claims that he did not know that two of the members of his posse were armed were undercut when two of the three men -- who have pleaded guilty to reduced charges in exchange for their testimony -- testified that Simpson had told them "to get some heat." One also testified that Simpson asked to see his concealed weapon permit.

The memorabilia taken from the hotel room included football game balls signed by Simpson, Joe Montana lithographs, baseballs autographed by Pete Rose and Duke Snider and framed awards and plaques, all together valued at upwards of $100,000.

BEWARE THE BLACK HOLE
The pun is not intended but the analogy is unavoidable: Anyone who enters O.J. Simpson's orbit risks getting sucked into the black hole that is his tarnished celebrity -- and they probably will not come out unscathed.

Judith Regan is a great example.

Regan, publisher of the ReganBooks division of HarperCollins, part of Rupert Murdoch’s News Corporation media conglomerate, was fired last December by the big man himself after withering publicity surrounding her plan to publish Simpson’s hypothetical confession to the murders. The release of If I Did It was to be tied to the broadcast of Regan’s interview of Simpson on Murdoch’s Faux News channel.

Well, the former publisher is back in the news.

Regan says in a $100 million lawsuit protesting her dismissal by News Corporation that one of Murdoch's senior executive encouraged her to lie to federal investigators about her past affair with Bernard Kerik after he had been nominated by President Bush to become homeland security czar in 2004.

The lawsuit asserts that the News Corporation executive wanted to protect the presidential aspirations of Rudy Giuliani, Kerik's mentor, who had appointed him police commissioner and had recommended him for the federal post.

It is hard to think of two more unsympathetic individuals than Kerik, who bedded Regan at a condominium reserved for stressed-out police officers in the wake of the 9/11 attacks, and Regan herself, who was so tone deaf to the marketplace that she even grossed out Murdoch, who built his empire on sleaze.

Posted by Shaun Mullen at 7:30 PM
Email ThisBlogThis!Share to TwitterShare to FacebookShare to Pinterest